What others have said about Al Caudullo…

“Al you are the greatest and in terms of evangelizing 3D, you’ve changed the world…”

“His (Al’s) vast experience at every level of execution from concept
to post-delivery, make Al the ideal partner for anyone seeking to enter the 360° or VR space. I’m pleased
that I got to work with him, to see the magic in action. Even beyond all the tools and the know-how, I
would most of all recommend Al because he is a pleasure work with.”

On set and in post-production Al’s expansive knowledge and professionalism contributed greatly
to the ultimate success of this project. I would highly recommend Al Caudullo and Explore 360
for any video production that you have and most certainly for any 360 video shoot.

“VR specialist filmmakers like Al Caudullo, to create and showcase wonderful 360 VR video from
around the world. Al was one of the fifteen creators worldwide who were chosen to participate in
Facebook’s new product launch – 360 Live…but also filmed them in a creative and engaging way. His live videos
were shared to Facebook 360 Page…” 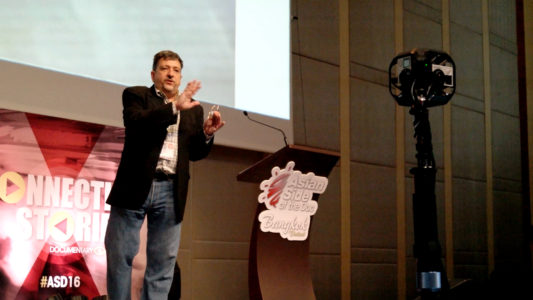 His career highlights include – including ground-breaking work in Videowalls – the 72nd Annual Academy Awards, the World Film Premiere of “Star Trek Insurrection,” and the 100th US Open PGA Golf Championship. During the Official Washington DC Millennium Celebration, Al served as Special Consultant and equipment supplier for President and Mrs. Clinton. His 360 VR work includes Celestica, Getty Images 360, Bill Gates Notes. These are just a few clients who have utilized Al’s unique vision for the conception of new and compelling storytelling.

In education, Caudullo created and taught 3D and 360 VR courses and seminars worldwide at Mahidol University, Bangkok, Singapore and Hollywood, California. In addition, Caudullo has brought his vast knowledge of 3D as a consultant to major industry players seeking to update and enhance their 3D and 360 VR hardware and software tools. As a 3D Stereographer and 3D Editor for film, TV and corporate production, his clients have included LG, Panasonic, Hitachi, Grass Valley, Samsung, NVidia, 3DeeCentral, Polaroid, Toyota and many others.

Al Caudullo is responsible for many successful case studies including a Case Study on 3D Stereoscopic Editing in the Field while on location in the mountains of Western Mongolia. He is often cited in a wide variety of international publications including, MSNBC, ICG (International Cinematographer Guild) magazine, and Bernard Mendiburi’s book, “3D TV and 3D Cinema, Tools and Processes for Creative Stereoscopy.” Al continues writing for International Magazines and websites like Student Filmmakers and HD Pro Guide.

Caudullo has been in the forefront of the exciting field of 4K UltraHD creating projects for Sony and Grass Valley. His work was highlighted at the National Association of Broadcasters (NAB) 2014. Al Caudullo has been a featured speaker at conferences and seminars worldwide including in China, Singapore, and Hollywood. In 2015, the one-hour self-financed documentary on Ancient Angkor was licensed by The Discovery Channel.