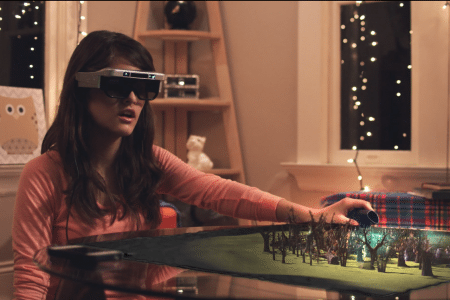 AR or Augmented Reality may soon eclipse VR or Virtual Reality with games like the ones in this story on The Verge written by Chris Plante.

Not so long ago, I would have mistook the augmented reality headset CastAR for magic or martian technology. In my demo at last week’s Game Developers Conference, the glasses made a real coffee table look like an animated game of Battleship, in which the ocean floor dipped through the wood and mortars arced inches above the surface. In another mode, toy army men fought one another, firing their plastic machine guns behind cover of a tiny car. Then two battalions of tanks traded artillery on a European countryside. While it’s far from the spectacular press images, above, CastAR’s augmented reality is no less an unforgettable experience.

And yet, CastAR is a warning of how quickly technology degrades from “a preview of the future” to “an expectation of the present.” The technology won’t even be available publicly until 2017, and yet, in the flooded augmented and virtual reality market of 2016, I wonder if the futuristic headset was already a thing of the past.

CastAR stands out with its pedigree. Co-founders Rick Johnson and Jeri Ellsworth left video game publisher and incubator Valve, bringing their augmented reality headset with them. Ellsworth handles hardware; Johnson, software; together they’ve attracted big name partnerships and co-workers, a $15-million venture capital funding, and over a million dollars in Kickstarter pledges — the latter of which the CastAR team returned to their supporters, who will still receive headsets. So along with the experience, they have money, talent, and support from well-rewarded early adopters. What the tech lacks is name recognition.

CastAR — and augmented reality, broadly — lives in the shadow of virtual reality giants like… Click here to read the rest of this story