Facebook has continued it’s forward reaching support for 360 videos. This time, they have introduced two new features, Guide and Heatmap.

Since we started rolling out 360 videos in News Feed last September, more than 250,000 360 videos have been uploaded to Facebook. As more and more people immerse themselves in 360 video experiences, we want to help publishers and creators better engage their audiences and learn more about how they respond to their 360 videos.

Guide, a new way to give your viewers a guided tour of your 360 videos as it plays, so they can enjoy a lean-back experience and never miss a key moment.

Heatmap, a visual insights tool that shows you which portions of a 360 video’s field of view your audience is spending the most time watching.” 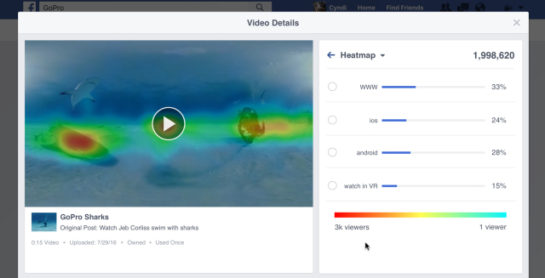 I immediately tried the Guide feature with my 360 Asia VR Demo Reel and was a little disappointed. On the first upload, I received an error message saying something had gone wrong and I could try again later. 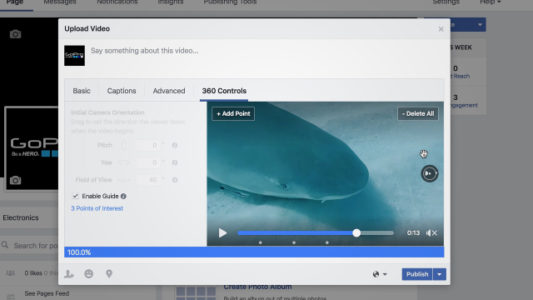 The only problem with that was the only way to go was to discard the posts and start again. Keep in mind, to use Guide, you have to create points of interest in the video and move the view to what you think is a better position for the 360. That meant that I had to redo the 10 points of interest that I put in originally. My second try went smoothly and posted without incident. But when I played back the 360 video, none of the points of interest changed the video at all. It is early in the process and I am sure that Facebook will work on getting the bugs out. 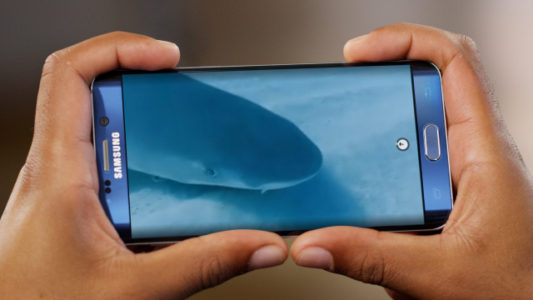 These are great tools for 360 content publishers. I have long felt that people would soon get tired of holding their smartphone and moving around or putting your finger on the screen to scroll. This feature is great for consumer 360 shooters. The reason that I say amateur is because Mettle Skybox already has incorporated this feature for pros to use in Adobe Premiere and After Effects with it’s “Rotate Sphere” feature which allows you to keyframe your moves to enhance where the viewer is watching. Facebooks new publishing tools do the same thing. One thing I do like is the ability to change the FOV (Field-of-View) from the fairly narrow 60-degrees to 90-degrees. I would prefer 110-degrees, but hopefully, that will come with a future upgrade.
Heatmap is a very interesting analytical tool for publishers. In Insights, it shows your video with a visual map that highlights the “hottest” parts of your video. These areas displayed in yellow to orange to reddish hues lets you know the areas that viewers are scrolling to see. The info is pulled from aggregate data of Facebook view ports, measuring when your viewer moves within 30-degres in any given scene. The idea is to give publishers and idea of where they might want to make a point of interest in future videos. The only problem with this feature is that you have to have 50,000 views for it to kick in. As you can well imagine not too many amateur 360, videos get 50,000+ views. And for Pros, they will be using Mettle Skybox to do the same thing. For this to be an effective tool the view count needs to drop considerably. But again, hopefully, in the future we will see a better response.