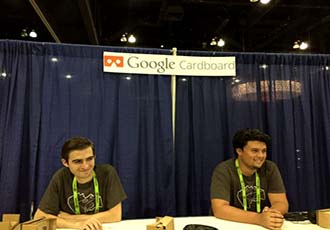 In a rather nondescript pipe and drape booth at the SIGGRAPH VR Village earlier this month two Google employees sat under a – well, cardboard sign that simply read Google Cardboard. It is evidence of the latest initiative by the search engine behemoth to establish a beach head in the nascent VR – AR (Virtual Reality, Augmented Reality) space that some see as the next technology wave, particularly in education and gaming.

Google’s cardboard initiative is well documented as an ingenious, low cost way to disseminate 3D content that somewhat simulates a VR experience. The do-it-yourself virtual reality headset is assembled in minutes from mostly cardboard, a magnet and some very inexpensive optics, plus your smartphone running the App. Content comes from many sources including YouTube, and Google is supporting an initiative called Expeditions offered to schools that “bring students to places a school bus can’t” according to the Google/edu/expeditions web site.

Google in education is nothing new for the company as its suite of applications for education is broad and diverse. This includes tools, devices (like Chromebook, and now cardboard) and content.

The company already supports a well honed group that is helping communities push the boundaries of education as the field (particularly research) continues to evolve around the Internet (and more importantly to Google, search engine technology). Google points out that the web extends learning beyond the classroom (i.e. project Expedition), and offers a differentiated learning experience available no other way. This includes the pace and modality at which each student learns best. Think web based video, text and interactive drill/testing, all ways to enhance the learning experience. Beyond this, the web offers expanded breadth of learning opportunities, anytime access to knowledge, as well as expanding access to the larger community of parents, and other stake holders. (Anytime access to a student’s progress, communication with teachers, etc.) Perhaps the most compelling reason for Google to be in this space, and for education to be looking in this direction, is that working with technology has become the norm so this approach to education prepares kids for their careers.

In short, VR is really an extension of what Google has been doing in education for quite some time. For VR content, Google is relying on its tried and true developer network to create next generation applications, and the list is growing.

Some VR Games at SIGGRAPH

Other key areas that will help usher in virtual reality include gaming apps, and beyond Expedition, examples include an app from Otherworld Entertainment called Sisters that was also shown at SIGGRAPH. It’s a creepy… [Continue reading]

This article was originally published DisplayDaily.com