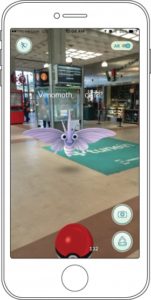 If, like most people in the U.S., you’ve got a smartphone, you may have noticed a suspicious uptick in the number of zubats, pidgeys, weedles, and rattatas popping up all over your city in the past few days. By 2023, 90 percent of the global population will own a smartphone so there will be no shortages of trainers to catch these pokemon.

These monsters—which look like cartoony bats, pigeons, worms, and rats, respectively—are all Pokémon creatures, and they’re part of a new free augmented-reality game called Pokémon Go in which you use your smartphone to spot them in the urban wild and toss little virtual red-and-white Poké balls to capture them. You can also visit virtual “gyms” where you battle your Pokémon against others’.

Though Pokémon Go was only released last week for the iPhone and Android smartphones and is available in just a few countries (the U.S., Australia, and New Zealand for now) it has become wildly popular: as of Monday, it was the top free and top grossing app for both iOS and Android, with five million to 10 million Android users alone having downloaded it.

On its face, the game isn’t that complicated, nor that visually compelling. You pick and customize an avatar, and, thanks to its usage of your phone’s GPS, as you walk around in real life you can also see your avatar navigate a world populated by lots of virtual locations tied to real-world landmarks at which you can gather Poké balls and other items. When you come across a Pokémon, the phone will use its rear camera to let you see it on the screen as though it’s hanging out in the real world in front of you.

So what’s driving so much interest in Pokémon Go so quickly? Augmented-reality apps and games have been around for years now, after all. In fact, Niantic, a Google spinout which developed Pokémon Go with the Pokémon Company and Nintendo (Nintendo is an investor in both companies), released two of its own back in 2012 and 2013: an urban exploration app called Field Trip followed by a sci-fi game calledIngress.

A lot has changed since then, however. Besides a big uptick in smartphone ownership, consumers have gotten a lot more familiar with augmented and virtual reality.

So while it’s been possible in the past for an AR game to pull in a sizeable audience (when announcing it was spinning out from Google last August, Niantic said Ingress had been downloaded over 12 million times), Pokémon Go may simply be entering the fray at a time when more people are more likely to want to try it out. The fact that the Pokémon characters, which emerged in the 1990s, are familiar to many of us surely helps, too.

To read the rest of this story click here