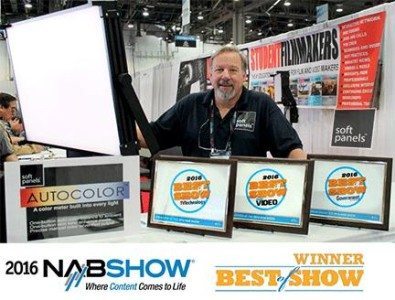 TV Technology, Government Video, and Digital Video magazines have each announced their “Best of Show” Awards for NAB 2016, as part of the world’s largest annual tradeshow for broadcast and video media industries. SoftPanels was unanimously awarded a “Best of Show” from each publication for its new breakthrough intelligent LED soft lighting system with a color meter built into every fixture.

The publications’ “Best of Show” awards are judged by a panel of industry engineers and experts on a product’s innovation, feature set, cost efficiency, and performance in serving the industry. Only a small number of products are selected each year at NAB to receive a “Best of Show” award among the hundreds of products nominated for the competition. 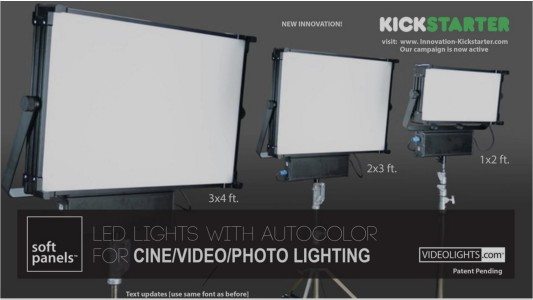 Utilizing its built-in Autocolor™ matching technology, patent-pending SoftPanels fixtures can instantly read the ambient color conditions and then exactly color-balance their output to match a scene’s ambient light, all at the push of a single button! In other words, users can simply point SoftPanels towards any light source, and they’ll instantly ‘AUTO’ color match that source (such as matching ambient room conditions, window light, other film lights, etc). These large, yet slim-line, lightweight, and low-power consumption soft lights fit anywhere and are available in 1’x 2′ (30x60cm), 2’x 3′ (60x90cm) and 3”x 4′ (90x120cm) sizes.

LED lights with Autocolor technology are the culmination of over 30 years of experience designing and building lighting fixtures for film and television industries, which includes winning two primetime Emmy® awards —  and are also enjoying a hugely successful Kickstarter campaign that is currently running through May 8, where it is already 300% overfunded.

Legacy variable color LED lighting fixtures often provide a numerical readout of the color temperature that the fixture is supposedly producing. In addition, conventional LED lights can also provide pre-set buttons to ‘approximate’ a fixed color temperature (e.g., 5500°K, 3200°K, etc.). In either case, these are only estimates, which are often off by as much as 1000 to 2,000 degrees Kelvin, which can introduce significant color errors. These color errors are only magnified when users mix multiple legacy LED lights on the same scene, as each can output a different color temperature. This lack of color precision greatly increases the time required to color correct in post, and further creates a problem when correcting for one portion of the image, other areas of the image undesirably go in the opposite direction (i.e., color crossover due to color mismatched legacy lighting fixtures).

Another feature built into every SoftPanels is the new ‘Skin Enhance’ feature. With a simple press of the separate Skin Enhance button, the light output of the fixture is instantly warmed, giving skin a much more pleasing healthy ‘suntan’ quality.