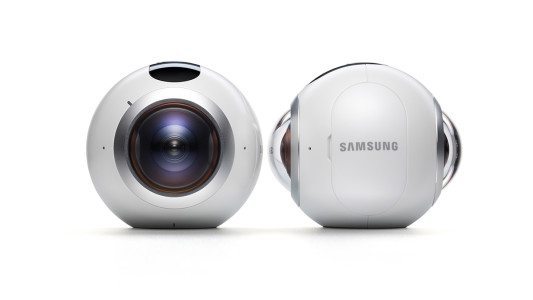 Scheduled for release in Q2, the Samsung Gear 360 VR Camera resembles a double-sided eyeball and in some ways it is. It is your eye into 360 VR world. The camera delivers a 3840×1920, 30-megapixel stills from a 15-Megapixel sensor, that are really designed for viewing on, preferably, your Samsung Galaxy S7 or S7Edge phone. The App and the Samsung Gear Headset are an integrated set meant to be used together to create and view 360 VR. The f2.0 lens can also make 180-degree images, but, why?

Each lens provides a 195-degree view with the overlap taken care of with the hard part of stitching and editing completed with your phone. Not too much more is known right now. As you can see above the images on YouTube look good.

It is interesting to note that the difference between consumer and pro is now coming down to how many lenses that your VR camera has. Two is Consumer, with 6 and up being in the pro realm.