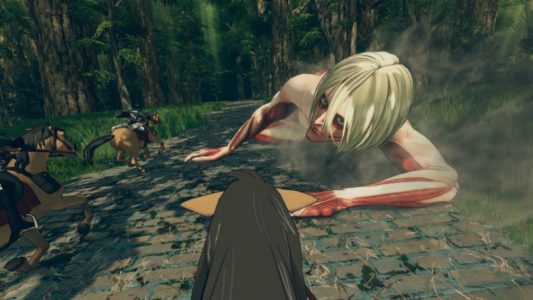 Based on reports by Siliconera, fans of the popular manga and anime series, Attack on Titan, will soon have the opportunity to go head-to-head with a man-eating Titan in VR as Attack on Titan: The Human Race makes its way to Tokyo, Japan later this week.  Written and illustrated by Hajime Isayama, Attack on Titan takes place in a world where the remnants of humanity are forced to live behind three massive walls in order to protect themselves from enormous man-eating creatures referred to as Titans. After the story’s protagonist, Eren Jaeger, discovers he has to the power to transform into a Titan himself, he and his comrades begin a quest to uncover the origin of this 100-year-old threat and save humanity from a grizzly fate.

The attack on Titan: The Human Race is a location-based VR set up that allows up to four friends to don the infamous Survey Corps cloak and venture beyond the safety of the walls via horseback for what I can only imagine is an absolutely terrifying chase sequence. Based on the “Female Titan Capture Operation” featured in both the manga and anime, teams will be tasked with navigating a massive forest while trying to escape the clutches of the deadly female Titan. Anyone unfortunate enough to get captured by the Titan will be subsequently eaten, so players will need to keep their heads on a swivel and avoid any oncoming obstacles if they wish to survive. A certain number of scouts are required to make it through the gauntlet in order to successfully complete the mission, so working as a squad will be vital.

While fans of the franchise have had a variety of video games tie-ins to quench their insatiable thirst for Titan blood, this is the first chance we’ll have to feel what it’s truly like to stand at the foot of a 45-foot Titan. Based on some of the photos provided, it appears a though players will be using HTC Vive Pro headsets during their mission, alongside one of the coolest location-based setups I’ve ever seen.