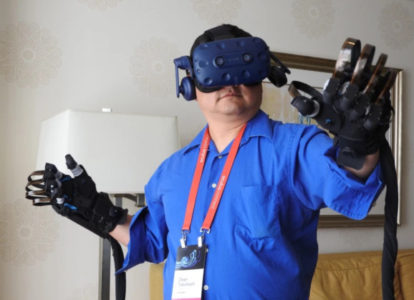 Haptx has been working on its haptic gloves — which give you a sense of touch in virtual reality — for a few years. Today, the company is launching its Haptx Gloves Development Kit, an industrial-grade product for advanced simulation in virtual reality. Haptx Gloves wants to empower professional VR users to develop simulations with realistic touch feedback and natural interaction. That’s a long-held dream for virtual reality visionaries who want to duplicate our real-world senses in VR.  While the gloves have obvious applications in VR games, most of the interest so far is coming from industrial and enterprise markets. I used the gloves in a demo with the HTC Vive last week. In the demo, I wore an HTC Vive headset and put on two gloves that were connected by thick wires to a big computer. The gloves were somewhat heavy on my hands, but they were lighter than they appeared to be, given their size. (I had to put sanitary finger gloves on each hand first.) Then I went into a demo featuring a barn and a farm landscape. I could touch the grains of wheat and feel how each rubbed against my fingers. I touched the clouds and felt rain droplets hit my open hand. It was creepy when a spider crawled across my hand and I felt it. But it was cute when a fox and sheep did the same thing. Each time I touched something, I felt touch feedback through the gloves. It was surreal. (It was my second time wearing the gloves, as the first time I tried it with only one. This time, the feeling was more fine-grained in terms of sensations.)