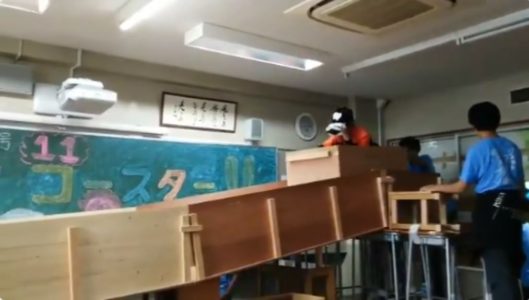 What was the most impressive project you ever made while attending junior high? I myself am particularly proud of an A+ four-cheese quesadilla I made while struggling through home economics.

As impressive as that quesadilla was, and it was impressive, it pales in comparison to a project conducted by a group of third-year Japanese students which involved the careful planning and construction of a functioning roller coaster accompanied by a custom-made virtual reality experience.

Developed as part of Takanawa Junior High School’s annual bunkasai, or “culture festival,” the group began with the construction of a basic roller coaster ride out of standard wood materials. However, it was only after fellow classmate @pansan1029 got involved that the project really took.  According to SoraNews24, the talented developer-in-training utilized a version of Minecraft modified with a rollercoaster, as well as a improved lighting and shadow effects. The motions shown in the VR experience mimic the same movements featured in the physical ride.

The 20-second attraction, while not a AAA experience by any means, is still an impressive first-outing for a team consisting entirely of 14 and 15-year old’s. Never-the-less, @pansan1029 was disappointed by their efforts, pointing out the multiple difficulties regarding the synchronization of the visuals and physical movements. The self-critical creator original wanted to build the experience in the Unity game engine and include touch sensor technology for better synchronization. However, limited resources and a short time frame forced him to make several sacrifices.