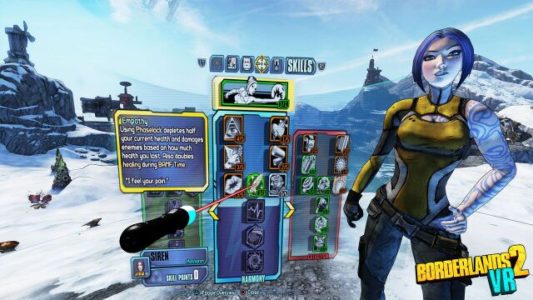 There’s less than a month to go until Gearbox Software and 2K Games launch Borderlands 2 VR exclusively for PlayStation VR. In preparation for its rollout – and to further tempt virtual reality (VR) players into buying it – the studios have released a new cinematic trailer to enjoy.

As you may expect from a Borderlands 2 VR trailer there’s plenty of action with character Maya demonstrating the PlayStation Move controllers, punching and kicking enemies far and wide. And when a bit of melee action gets boring then there’s always a trusty gun or two to play with, or how about some telekinetic powers to juggle enemies with.

There’s no actual gameplay footage in this new video unfortunately, you’ll find that in the launch announcement trailer from last month. There’s likely to be several more character videos incoming so keep an eye out for more.

Borderlands 2 VR is set for release on 14th December 2018, retailing for $49.99 USD, via PlayStation Store. A dynamic PlayStation theme will also be available to those who pre-order the title in advance.

The original Borderlands 2 came out six years ago and was a massive hit for Gearbox Software.

The new VR version features the original characters as well as adding new options including reworked skill trees that keep the single-player VR focus in mind and new features that play off the VR environment, such as “BAMF Time” – BadAss Mega Fun Time – which is Borderlands’ own take bullet-time from The Matrix films.

Over the last six years, the studio has released 10 DLC packs to expand the original’s gameplay. Unfortunately, Gearbox Software has confirmed that the VR version won’t include any of the DLC when it arrives in December.