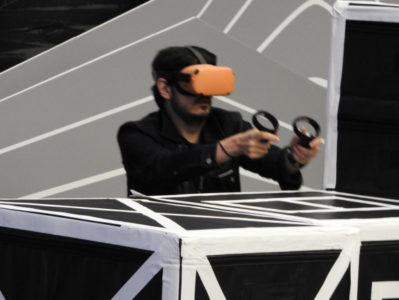 The first thing I thought about when the Oculus Quest was officially announced at the recent Oculus Connect 5 is using the standalone wireless VR headset in a wide, open field outside. The idea of playing a free-roaming game by actually running around in a massive space sounds amazing. We did some light tests with the Lenovo Mirage Solo, but with “Rift quality experiences” and games like Superhot VR coming to Oculus Quest, in its a whole other category.

My excitement may have been a little premature, though. At OC5 we got the chance to speak with Sean Liu, Head of Hardware Product Management. We already talked to him about the Quest’s active cooling and launch lineup, so we asked him point blank: Can we use the Quest outside?

“It is indoor-only,” said Liu. “We have tried to make the rooms here at OC5 different to show a wide range of setups. So like Sports Scramble [also known as Tennis Scramble, it was referred to by both names], same are like living rooms, some are a wider open court space.