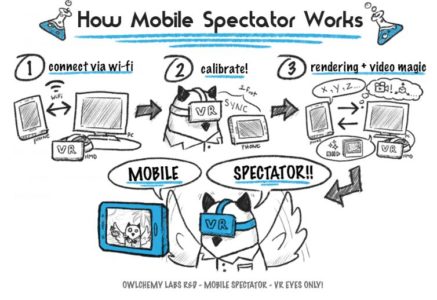 alchemy Labs has been at the top of the virtual reality (VR) game ever since its first release way back in 2016, Job Simulator: The 2050 Archives. It’s been so popular that it tends to stay in the top 10 downloads for PlayStation VR, and most likely helped sway its purchase by Google last year. Being the inventive team that they are, a recent blog posting has showcased one of the studio’s latest experiments, an augmented reality (AR) spectator camera dubbed Mobile Spectator.

The idea behind Mobile Spectator is to allow those not in VR to see into a VR players world via the use of a mobile app. Developers have tried all sorts of tricks in the past to enable non-VR users to get an understanding of a virtual world without a headset, with the most common being mixed reality (MR) videos involving green screens, cameras, and a well-specified PC.

The Mobile Spectator mobile app aims to simplify that process by using ARCore to track the phone’s position and planes in the physical space, thus providing a unique third-person view. Explaining how this works on the studio’s blog the team said: “To allow for this unique third-person view, we tried a different approach from a traditional multiplayer networking solution.

The phone and PC communicate directly via WiFi. Once the phone is calibrated, its AR-calculated position is sent to the PC, placing an additional camera in the VR scene to represent the Mobile Spectator. The PC renders a frame from this camera, encodes the frame, sends it back to the phone, decodes it there, and… viola! You have a live video feed on both the phone and PC.”

Mobile Spectator requires an in-game avatar to not only be visually legible but eye-catching as well. With Owlchemy Labs currently working on Vacation Simulator, this had all the necessary interesting visuals to make for a great demo.