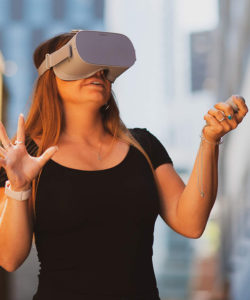 SEATTLE – September 24, 2018 – Pixvana, a company powering the future of XR (VR/AR/MR) storytelling and immersive media, today announced the full release of SPIN Studio, the industry’s only end-to-end VR platform for editing, creating and distributing high-quality VR video content. For the first time ever, VR creators can easily build interactive story experiences using hands-on tools that work with natural gestures and actions, all from within the headset. In addition, creators gain access to some of the industry’s fastest tools to expedite processes, from camera upload to image editing, stitching, and distribution.

“We are bringing to market the first complete set of cloud-based VR tools, with the capability of creating and editing in a virtual environment, making it easier than ever to build immersive VR experiences,” said Forest Key, Co-Founder, and CEO of Pixvana. “With this release, we’ve completely reimagined the way people create interactive stories and made it possible for them to unlock the real potential of VR media. Both expert and novice creators can now make VR video experiences and engage with audiences in more powerful ways – enlivening events, presentations, classrooms, tours and more.”

Among the most exciting platform innovation is the industry’s first set of hands-on design tools that help creators quickly combine media into interactive stories from a VR native environment. While paired and donning the Oculus Rift, creators use natural gestures and actions to place media and develop experiences in a WYSIWYG interface. From within the headset, creators can easily sequence linear stories from their VR playlist, connect scenes in branching timelines for more complex stories, add interactive hotspots to guide the user’s gaze, incorporate hotspot actions (cue picture on gaze, jump to new scenes, trigger 3D audio effects), add graphic overlays and logos, and more.

Pixvana is also launching its new stitcher as part of SPIN Studio, allowing creators to turn multiple video files into an immersive story experience with just a few clicks. Unlike most stitchers, SPIN Studio renders masters at an 8K+ resolution in the cloud. Using a computational grid to render output, the entire stitching process is completed in about half the time it takes a high-performance desktop application.

“8K is the future. With it comes incredible benefits, but the sheer volume of data still poses challenges,” said Jason Paul, general manager of Gaming Software and Virtual Reality at NVIDIA. “With NVIDIA’s VR Works 360 SDK, the SPIN Studio solution for rendering 8K in the cloud simplifies the workflow, making 8K more accessible to many content creators.”

In addition to state-of-the-art editing and creation tools, SPIN Studio also provides VR Casting for easy sharing. Using the simple “pair-and-share” feature or sending a shared key, creators can securely deliver their high-quality resolution content to viewers around the world via streaming or download, with no coding required. Content can be targeted to a single headset or dozens, and across 360/VR enabled platforms.

“Pixvana recognized the pain in managing VR video production early on,” said Paul Lundahl, Co-Founder and Creative Director of Emotion Studios, a Bay Area creative agency focused on digital storytelling. “They focused on the hard problems and developed a bulletproof technology stack, all in the cloud, with tools that are effortless to understand and use. Pixvana has built a platform that is indispensable for the production of our VR films. From ingest to stitching, simple editing, adding interactivity, color-grading, and publishing – we have one cloud-based portal to manage all of our productions. I’m thrilled with the quality level they are helping us to deliver, and confident they are already building for where we are headed. No company has come close to competing with what they provide, and we’ll be with them for the long haul.”

SPIN Studio is compatible with many devices including Oculus Go and Rift, Samsung Gear VR, Google Daydream, and HTC Vive. Start creating your next VR video experiences today by signing up for a free trial of SPIN Studio.

Pixvana is a Seattle-based SaaS startup that powers the future of XR storytelling and immersive media. SPIN Studio from Pixvana is the first integrated platform that transforms the way customers edit, create and show VR video experiences across any device, anywhere. The company is venture-backed by Vulcan Capital, Madrona Venture Group, Microsoft, Cisco, Raine and Hearst Ventures. Pixvana’s founders have proven startup success in media technology, and hail from senior product and engineering leadership roles at Apple, Adobe, Microsoft, and Lucasfilm. For more information visit www.pixvana.com.