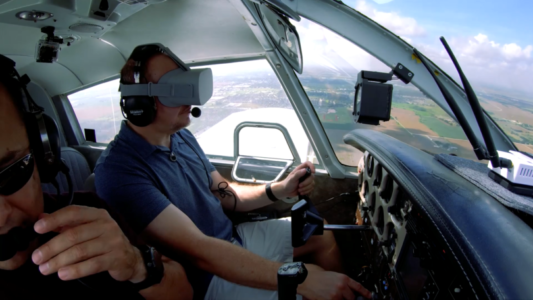 In a series of videos uploaded to Thrust Vector’s YouTube channel earlier this week, Nagle can be seen piloting a light aircraft while wearing an Oculus Go headset as Sommer’s sits beside him as a safety pilot. What Nagle is seeing is a crystal clear map of the area created in the Unity game engine, complete with altitude and heading references courtesy of a WAAS-enhance GPS and modern ADS-B aircraft surveillance equipment strapped to the headset. Mapbox mapping software updates the Unity visuals in real-time, delivering an accurate visualization of the real-world surroundings while he flies.

“It seems counter-intuitive to put on something that restricts all of your natural vision when flying a plane, but in our testing so far, it quickly feels very natural,” spoke Nagle in a company blog post. “In the flights I’ve flown so far, for me it was not only easy to fly, it was easier to hold altitude and heading precisely than without VR. (This is because we show a HUD-type display overlaid in front of the airplane…no need to look down to check these instruments.)”

“We have been asked, wouldn’t AR be a better base technology to use for this? We honestly don’t know yet. I tend to favor VR because it gives me a virtual clear VFR day, and I can concentrate on flying the airplane. AR would allow the easier view of the instruments.”

“We are looking into a hybrid solution that uses the camera on the headset to pass through an image of the cockpit into VR, which we would then render where your instrument panel would be. The bottom line is we need to experiment with a variety of technologies to find the one best suited for use in the cockpit.”

So far, the duo claims to have conducted nearly two dozen successful “VR VFR” flights, however, the project does have its fair share of limitations. While they have used the system to practice final landing approaches, often getting as close as 50 feet to the ground, the team still hasn’t reached a point where they feel confident landing a plane using the standalone 3DoF headset.