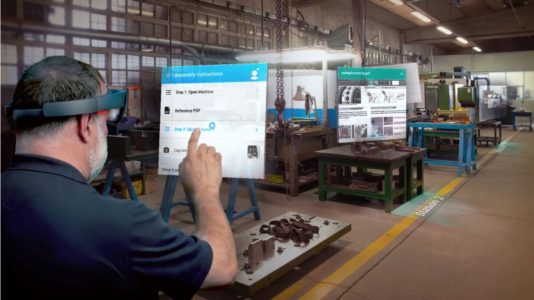 Upskill has been working on a platform to support the augmented and mixed reality for almost as long as most people have been aware of the concept. It began developing an agnostic AR/MR platform way back in 2010. Google Glass didn’t even appear until two years later. Today, the company announced the early release of Skylight for Microsoft HoloLens.

Upskill has been developing Skylight as an operating platform to work across all devices, regardless of the manufacturer, but company co-founder and CEO Brian Ballard see something special with HoloLens. “What HoloLens does for certain types of experiences, is it actually opens up a lot more real estate to display information in a way that users can take advantage of,” Ballard explained.

He believes the Microsoft device fits well within the broader approach his company has been taking over the last several years to support the range of hardware on the market while developing solutions for hands-free and connected workforce concepts.

“This is about extending Skylight into the spatial computing environment making sure that the workflows, the collaboration, the connectivity are seamless across all of these different devices,” he told TechCrunch.

Microsoft itself just announced some new HoloLens use cases for its Dynamics 365 platform around remote assistance and 3D layout, use cases which play to the HoloLens strengths, but Ballard says his company is a partner with Microsoft, offering an enhanced, full-stack solution on top of what Microsoft is giving customers out of the box.