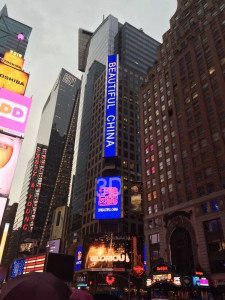 Using a cutting edge combination of 3D and VR offers New Yorkers the experience of China without needing a passport. Titled, “A Beautiful Day, A Beautiful China 2015” , an interactive experience sponsored by the China Intercontinental Communication Center, will take place at Reuters US Headquarters in New York’s Times Square on September 14, 2015.

The event is part of the 2015 annual international publicity program launched by the State Council Information Office of the People’s Republic of China and the China National Tourism Administration. A Beautiful Day, A Beautiful China is the first international promotional event to make use of virtual reality technology to present China’s tourism offerings and culture to the world.

Nearly 50 media organizations from around the world have been invited to cover this event. Authoritative journalists and leading US-based China experts as well as officials from the Chinese government and Chinese embassies and consulates will also be in attendance.

The event will feature 3D virtual scenery, complemented with videos and images showcasing Chinese cultural landmarks. The multimedia event can be equally enjoyed whether viewed on a PC, a smartphone or a wearable device. Several of China’s most recognizable landmarks will be part of the presentation, including Beijing Olympic Park and the National Aquatics Center, Leshan Giant Buddha, Mt. Wuling Great Rift Valley, Mulan Mountain, Changbai Mountain and the Sea of Flowers for a truly audio-visual virtual-reality experience highlighting the depth of Chinese culture.