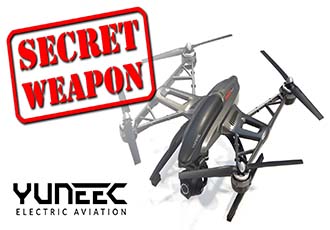 DJI? Of course, the world knows this power drone! Yuneec? Some might be left blank.

Despite being less famous than DJI drones, Yuneec has enormous amount of value to offer!

The Yuneec is nonetheless growing more popular in the quadracopter drone world and can be best described as a direct competitive rival of the DJI Phantom. In particular, the Yuneec 4K Typhoon Q500 is the closest in specs and capabilities on the market to the already well-recognized DJI Phantom 3.

Both drones command nearly identical prices, with the Typhoon Q500 selling for slightly more than the Phantom 3’s $1,259 at $1,299 (the 4K camera version of the drone, there is also a $1,100 HD 1080p version). Furthermore, both drones offer very similar design and video capture features.

For starters, the slightly pricier Yuneec comes with more accessories, such as a carry case and two batteries instead of one. The Phantom, on the other hand, has a carry case which is sold separately and comes with only one battery in the box.

While both drones offer great aerial 4K video, the responsiveness of the Phantom 3 is definitely superior and along with this, the drone also does a superior job of maneuvering in sharp movements while still keeping its camera very steady. However, even here, the Typhoon beat out the Phantom 3 in terms of battery life.