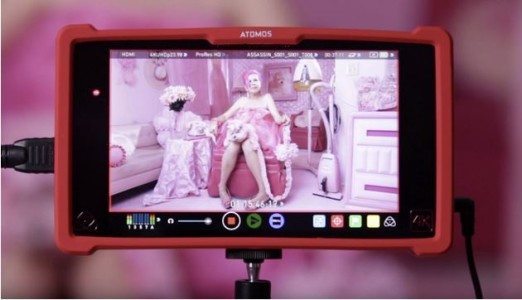 Atomos used the IBC to make a major announcement expanding it’s already powerful 4K line up. The Shogun Studio is a Broadcast & Live Event 4K package. With Canon RAW and Motion Blur Time Lapse upgrades thrown in. The debut of the Ninja Assassin, a baby brother of the Shogun, priced at $1295 opened up the market to DSLR and Mirrorless users. For those still needing HD, Atomos made the stalwart Ninja 2 at steal at under $295.

These moves take Atomos to a new level of dominance over the market of external recorders, both 4K and HD.

Melbourne, Australia – 11th September, 2014: Atomos have arrived at IBC in 2015 with a bag full of exciting announcements all the way through the product line-up.

– At the top of the line-up we will be demonstrating the 4K/HD 3RU 2ch dual 7″ Shogun Studio live for the first time, targeted squarely at live event, broadcasters and mobile production.
– The popular 4K/HD Shogun unit is upgraded to AtomOS6.5 with 8 free features added, headlined by Canon Raw to ProRes/DNxHR recording for the C500 and C300MKII.
– The much anticipated 4K upgrade to the Ninja range, the Ninja Assassin, is on show paired with the world’s most popular 4K HDMI cameras – it is available globally now.
– The industry standard Atomos HD monitor-recorders hit a record low price point with Ninja 2 dropping from $695 to $295 and both the Ninja Blade and Samurai Blade falling from $995 to $495.

“IBC is as diverse as Europe itself and our 4 announcements deliver exciting news for every workflow and customer segment.” said Jeromy Young, CEO of Atomos. “From cinema and broadcast upgrading to 4K through to HD filmmakers unlocking faster, cheaper, better workflows for the first time with a sub $300 Ninja – ProRes is now for the masses.”

The Atomos booth at IBC (9.D25) will showcase all of these announcements, the world’s leading 4K and HD cameras, the world’s largest 3m diameter drone, an underwater Shogun/Nauticam tank, our famous daily prize giveaways and presentations from Atomos users and partners.

Shogun Studio is the world’s first all-in-one 4K & HD, 2ch, dual 7″ 3RU rack recorder, monitor and playback deck. The dual record channels provide the ability to simultaneously record 2 separate inputs in your choice of resolution up to 4K 30p or HD 120p or 2 versions of the same input for parity.

The dual 7″ calibrated SuperAtom IPS monitors allows for collaboration on set, have built in scopes for shot setup and 4K to HD down scaling for connection with existing HD infrastructure or multi resolution master/proxy recording. From a control perspective, the Shogun Studio features 9 pin Sony RS422 machine control, AMP over Ethernet or start/stop trigger over both HDMI and SDI.

Ninja Assassin was released just prior to IBC as the 4K upgrade to Atomos‘ long running Ninja line-up. Ninja Assassin delivers 325ppi monitoring functionality and the 7″ size needed to truly master 4K along with the only true 10-bit 4:2:2 professional recording solution for Apple, AVID & Adobe workflows and all with a price & weight the lowest on the market. This firmly targets 4K DSLM & video cameras such as the Sony a7s and a7RII, Canon XC-10, Panasonic GH4, Sony FS7 and Panasonic DVX-200 Assassin bypasses known camera limitations such as compressed MPEG/h.264 recording, 4:2:0 color compression, 30-minute time limits and the disadvantage of monitoring on a small 3″ screen.

AtomOS6.5 like all Atomos OS updates is a free download for existing and new Shogun and Ninja Assassin users adding significant functionality to the award winning products. Ninja Assassin key updates include;

– Motion Blur added to Time-lapse, blurring up to 64 continuous frames together in one sequence
– New and improved frame guides added for 16:9, 2.40:1, 2.35:1, 1.9:1, 1.85:1, 4:3
– 1:1 and 2:1 zoom can now be selected when anamorphic de-squeeze is enabled
Shogun will benefit from all of the above features as well as the following SDI and Raw based functionality;
– Canon C500 Raw and C300 Mk II Raw to ProRes and DNXHR recording, giving C500 users a viable 4K recording solution and C300MKII users a cost effective alternative to CFast recording media
– New 3D LUT’s preloaded onto the unit specifically for C500 and C300 MkII
– Start/stop trigger for JVC and Ikegami camera triggers
– Added LTC input via the Genlock input

New pricing on HD range has also been announced at IBC. The Samurai Blade, Ninja Blade, Ninja 2 will see a price reduction in excess of 50%, taking the Ninja 2 to the lowest price seen for a Recorder-Monitor and the Blade series offering incredible value for HD monitoring and ProRes / DNxHD recording.

Atomos is based in Australia with offices in the USA, Japan, China and Germany and has a worldwide distribution partner network. Further product information can be found: