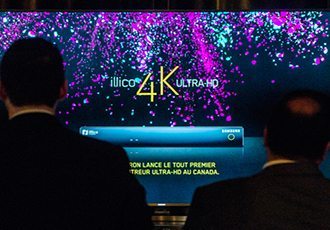 An eight-tuner-DVR-equipped device produced by Samsung capable of storing up to 115 hours of high-density Ultra HD content was announced to be released by the Canadian MSO Videotron recently.  The set-tops will be available starting later this month and will allow subscribers to Videotron’s illico pay-TV service to see a limited amount of 4K VOD programming on their Ultra HD sets.

Uptake of Ultra HD monitors is increasing, however, with IHS reporting a record 3 million shipments worldwide of 4K sets in April.

For its part, Videotron said it wants to kick-start a robust Canadian market for 4K content, the dearth of which has held back the growth of the technology all over the globe.

“As a leader in cable TV, Videotron hopes that its move into UHD will serve as a catalyst for the development of Canada’s UHD ecosystem and spur all the players in the distribution chain to follow suit, from the movie studios and post-production facilities to the broadcasters,” said Manon Brouillette, president and CEO of Videotron, in a statement. “Consumers will be the winners. With the advent of UHD, it will be possible to create an astonishing television experience for viewers. In terms of both image quality and fast, fluid navigation through the interface, illico 4K UHD will give our customers what is unquestionably the best in technology and entertainment.”