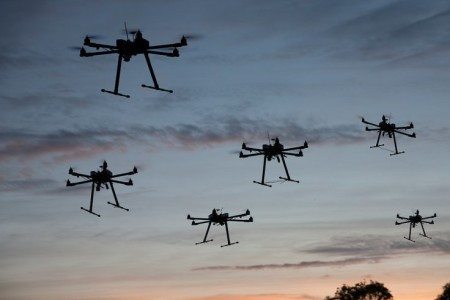 Have you registered your drone? The National Drone Registry opened for business today. Beginning Monday, the FAA requires owners of UAV’s to register.

The maximum penalty is pretty stiff, up to $27,500 with criminal penalties resulting in $250,000 or three years in prison.

“Whether the FAA will be able to enforce this rule is a genuinely open question,” Eli Dourado, director of the Technology Policy Program at the Mercatus Center at George Mason University.

“Thousands of children may be getting drones this holiday season without being aware of the new rules,” Dourado said. “The FAA doesn’t have the manpower to investigate and punish every instance of flying an unregistered drone, nor, I suspect, would it have the political will to. It is not going to send little kids to jail for this.”

How to register a drone

The new requirement only applies to people with drones weighing 0.55 pounds (including extra equipment such as cameras) to 50 pounds.

People with drones in that range can register online for $5, although it’s free before Jan. 20. The FAA is asking for names, home addresses and email addresses; once someone registers, they will get an identification number to write on all of their drones.

The drone registry comes ahead of more comprehensive regulations the FAA is planning to put in place in spring 2016.

The hope is that law enforcement will be able to use the identification numbers to find the owners of rogue UAVs. Over the last year, errant drones made headlines by causing firefighters to ground planes in California, crashing onto the White House grounds, and nearly hitting a medivac helicopter.

People who already own drones have until Feb. 19 to register, and new drones must be registered before their first flight.

What happens if you don’t register?

It’s not really clear. It certainly seems doubtful that the FAA would slap every offender with a $27,500 fine. But the FAA did not give specific answers as to what smaller penalties might be.

“Our focus is on educating owners who have not yet registered and to maximize compliance,” an FAA spokesperson told NBC News. “For egregious violations of the registration rule, we also have several enforcement tools available, including civil penalties.”

The $27,500 figure comes from existing FAA regulations for failing to register manned aircraft. Obviously, a 0.55-pound drone is different than a Cessna that weighs more than 2,000 pounds. The vast majority of drone owners won’t get fined thousands of dollars for flying around their Christmas toys, said Michael Freudenberg, a partner at law firm Harrington, Ocko & Monk.

“It’s likely if it’s a first-time offender, who is using it for recreational use and hasn’t caused any harm, that they will get hit with a minimal fine.”

But that doesn’t mean someone couldn’t be slammed with maximum civil penalty. Careless drone operators could really hurt someone, especially if flying over a crowd or near an emergency area.