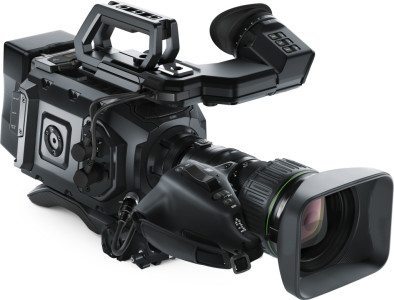 Blackmagic URSA Mini B4 Mount will be demonstrated on the Blackmagic Design IBC 2015 booth in Hall 7, Stand H20.

Once the mount is installed, B4 lenses can be attached to the camera. Blackmagic URSA Mini PL also includes a new lens control connection that works with both PL and B4 lenses. This new connection supports both analog and digital lens control standards and also provides iris control and power for the lens.

The built in PL lens mount on URSA Mini PL can be changed to the B4 lens mount whenever needed, giving customers the flexibility to use URSA Mini with their existing B4 broadcast lenses for HD today, and with PL cinema lenses for Ultra HD and 4K tomorrow.

The Blackmagic URSA Mini B4 Mount turns URSA Mini PL into an incredible ENG style camera. Crafted from advanced technology magnesium alloy, URSA Mini is a rugged, yet extremely lightweight and well balanced shoulder mount camera that is comfortable enough to be used all day. There’s a 5” fold out monitor, complete technical scopes, professional audio recording, and dual ProRes recorders all built right in as well as the optional URSA Viewfinder and URSA Mini Shoulder Kit. With URSA Mini, news crews can shoot a story, mount the card on a computer in the van and begin editing immediately without having to convert files so they can get stories on air fast.

Blackmagic URSA Mini PL can be purchased with either a 4K or a 4.6K image sensor and features up to 15 stops of dynamic range. When used with high definition B4 lenses, URSA Mini shoots incredibly clear HD images that have massive dynamic range and look far better than the images from a traditional broadcast HD camera. Plus, broadcasters can use their URSA Mini PL with B4 lenses on one job and then switch back to PL lenses for another job.

“Since we announced URSA Mini at NAB earlier this year, broadcasters have been asking us for a B4 lens mount,” said Grant Petty, CEO, Blackmagic Design. “We listened carefully and designed a way for them to use the B4 lenses they already have for high definition production, and still give them a camera that works for Ultra HD and 4K production because they can switch back to a PL mount lens whenever they need! The most exciting part about this announcement is that broadcasters using URSA Mini get the HD camera they need today with modern file formats like RAW, ProRes and DNx plus they also get wide dynamic range so the quality of the images are much better. From our conversations with broadcasters everybody is talking about the excitement of having digital film capability in an ENG style camera and they are aware of the extra creativity that can bring to their production work.”

Blackmagic URSA Mini B4 Mount will be available in November for US$295 from Blackmagic Design resellers worldwide.

Product photos of the Blackmagic URSA Mini B4 Mount, and all other Blackmagic Design products, are available at www.blackmagicdesign.com/press/images.