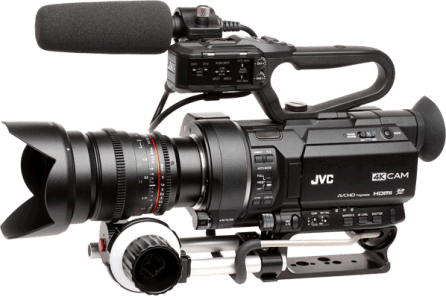 JVC has joined the “Log” crowd, introducing the JVC Log for the GY-LS300 4KCAM Super 35 handheld camera. With JVC Log the camera boasts expands dynamic range by 800 percent with film-like latitude, as well as Cinema 4K (4096×2180) and Cinema 2K (2048×1080) recording modes for digital cinema presentations. I am waiting to get hands on to test these huge gains.

Meanwhile here is the press release from JVC.

WAYNE, NJ (Nov. 4, 2015) – JVC Professional Video, a division of JVCKENWOOD USA Corporation, will showcase its ProHD and 4KCAM camera lines, along with its latest Blu-ray/hard disc drive combo deck and an assortment of professional field and studio monitors, at Content and Communications World (Booth 1119), which runs Nov. 11-12, 2015, at the Jacob Javits Convention Center in New York City.

JVC will also demonstrate a new slow motion mode, which records HD footage at up to 120 frames per second, for its GY-HM200 and GY-HM170 4KCAM cameras. The new feature will be available for both cameras via a free firmware upgrade in December. All three 4KCAM camcorders now include a histogram to verify the brightness distribution of an image, as well as a 70 Mbps recording mode for recording 4K footage in smaller, more manageable files onto affordable SDXC Class-10 U1 media cards.

Both 800 Series cameras include genlock and time code terminals for multi-camera setups, HD/SD-SDI out, HDMI out, 3.5mm stereo headphone jack, and a four-channel audio system with stereo AUX inputs and two XLR mic/line inputs with phantom power. The GY-HM890 also includes an HD/SD-SDI Pool Feed input that can record and stream video and audio from another camera or SDI source during press conferences or other pool feed environments. Beyond ENG, the GY-HM890 is a versatile studio or multi-camera field production camera, with a 68-pin connection that accommodates JVC fiber or multi-core camera modules without the need of firmware upgrades.

“Between our ProHD and 4KCAM product lines, we have an extensive collection of cameras to meet the needs of every video professional,” said Dave Walton, assistant vice president, marketing communications. “Several models include built-in HD streaming for broadcasting live reports from the field or webcasting live to Ustream and YouTube. From ENG to full 4K production, JVC cameras offer incredible imagery and native file recording for streamlined post-production workflows.”

JVC will also showcase its new SR-HD2700 professional Blu-ray/hard disc drive combo deck, which was designed for easy duplication and disc authoring of Blu-ray or DVD discs without a PC. It features a simple, menu-driven interface and a variety of inputs for compatibility with digital and legacy analog sources. The SR-HD2700 can record a live HDMI signal from a video camera or DSLR without HDCP encryption. Plus, it can record to its 1TB internal hard drive and optical disc simultaneously, providing redundancy and eliminating the need to copy video files to another disc after recording.