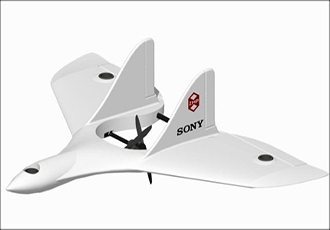 Sony’s teaming up with a Tokyo-based startup called ZMP, to form a subsidiary called Aerosense Inc. to build drones equipped with sensors for enterprise customers.

Aerosense will be grown out of Sony’s mobility unit, which also makes sensors that are found on Apple and Samsung smartphones today. But despite its origins in a more consumer-oriented branch of Sony, Aerosense will eschew the consumer drone market for an equally-crowded enterprise drone market. Sony said that it plans to leverage its “camera, sensing, telecommunications network, and robotics technologies,” to build competitive enterprise-grade drones.

Aerosense is set to launch in August, but it won’t offer drone flights until the beginning of 2016.

Below is the official Press Release from Sony’s website.

Sony’s camera, sensing, telecommunications network, and robotics technologies will be leveraged alongside ZMP’s automated driving and robotics technologies together with their business experience in industrial fields. Aerosense Inc. will combine these assets and develop comprehensive solutions that meet needs including measuring, surveying, observing, and inspecting. It will aim to roll out these services for enterprise customers beginning in 2016.

Sony Mobile is proactively engaging in new business creation initiatives, with a particular focus on the Internet of Things (IoT) sector. This joint venture represents a part of this push into IoT, as Sony strives to provide its customers with additional value by developing and managing total package cloud solutions.

ZMP’s stated mission is “Robot of Everything: To create a safe, fun and comfortable lifestyle with robotics technology.” In line with this, ZMP has developed its automated driving technology and put it into use in various fields. To date these solutions have been limited to the ground; with this joint venture, ZMP will take to the skies and apply its expertise in an entirely different realm, as it aims to create new services that were not possible on land.