There is a new entrant in the drone wars. Shenzhen-based Rapoo has experience in the robotics market but this is their first quadcopter. The carbon fiber body has both snap on battery and snap on gimbal, a big advantage to other designs. It also makes the portability much easier. Built in to the Remote is a  smart phone holder making it a simple task. The reported battery times of up to 22 minutes sounds great but needs to be tested in practical use. Both he battery and the remote can be charged together from the provided external charger. 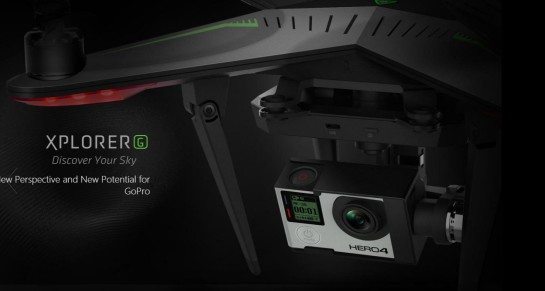 You have your choice of camera systems with the Xplorer, either the GoPro Hero Gimbal mount (camera not included) or the company’s own 1080p 14MP camera gimbal combo.

In a somewhat frank assement of the drone industry that most have avoided, Michael Zeng , founder of Raoo and CEO of ZeroTech told us, “It is impossible to avoid the drones fly away， considering GPS as an unsolvable problem . This is not just an issue for a single company. Small plane needs GPS to sense the change of latitude and longitude. Without the GPS, it can be very dangerous. It is hard to accept the fact that an expensive drone flies away easily. This brings an unsolvable problem for the drone industry.” Michael Zeng believes that this problem is hard to solve at present and we are only

Michael Zeng believes that this problem is hard to solve at present and we are only capable of avoiding it as much as possible. He said, ‘We did a lot to stop the drones flying away. We made a beginner mode, with limitation on the height and speed that the drone may fly to, in order to avoid the drone flying away. Under the beginner mode, the drone cannot be started without GPS.”