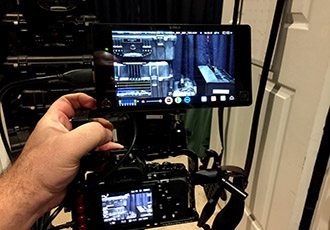 Sony lead the way in the Full Frame 4K Cinema Look video camera revolution – setting the bar for affordable 4K A and B roll recording – Especially when paired with the ProRes Powerhouse of the Atomos Shogun.

Melbourne, Australia – 11th June 2015: Sony has stamped their position as the world’s largest sensor manufacturer with the announcement of the a7RII, a flagship full frame Mirrorless camera. Winning the 4K race to replace the hugely successful “Affordable Cinema Look” from the HD only Canon 5D series. The impressive feature list targets photography and video professionals alike with a 42.4 MP sensor, ISO 102400, 5 axis image stabilization and high speed AF response but more importantly true video professionals need the Atomos Shogun to up the anti with 880mb/s direct to 10-bit Apple ProRes and Avid DNxHR, drastically improving the quality from this amazing sensor and by-passing the cumbersome 100mb/s at 50:1 compression that is offered internally. Bundled with our $1695 Shogun, the a7RII is the perfect stand alone A camera or integrated B camera across an entire direct edit codec production.

Photographers entering the video space will appreciate the 4K internal XAVC S recording but video professionals will be eager to utilize the 4K sensor to output a clean 4K signal over HDMI directly to the Atomos Shogun to realize the following;
• Direct to ProRes/DNxHR 4K recording (up to 2160p30) and ProRes/DNxHD recording (up to 1080p60). This offers 880mb/s for 4k and 220mb/s for HD as opposed to the 100mb/s of the XAVC S codec and means users can confidently use the a7RII for A or B roll shooting together with higher end 4K cameras.
• By recording direct to these edit friendly codecs users do not have to transcode the a7RII internal recordings to a codec ProRes or DNx, saving time and the need to use additional plugins when editing in Apple FCPX, Adobe Premiere or Avid Media Composer.
• S-Log2 Gamma and S-Gamut LUTs can be reviewed on the calibrated 7″ LCD monitor and adding the ability to preview looks buy uploading LUTs in a .cube format.
• Bypassing the 30min recording limit imposed on DSLR cameras by recording direct from the sensor.
• SSD recording media, that are faster and more than half the cost per GB compared to the SD cards used by the a7RII.
• The 4K recording, apart from being the native codec for NLEs, is also 4:2:2 color sampling and 10-bit color depth that enables the freedom in post production to integrate 10-bit effects and overlays.
• A 7″ monitor almost six times the area of the a7RII’s 3″ display, is the only way to truly set up Pro shots with features not available on the a7RII like 3D LUTs, 2:1 & 1:1 zoom for critical focus, vectorscope, false color and the ability to have ongoing color calibration using an optional Spyder unit.
• Ability to tag footage on the fly as Favorite/Reject ready for immediate integration into Final Cut Pro, Adobe or other NLE’s.
• With built in HDMI to SDI signal conversion the Shogun/a7RII combination can perfectly integrate into an existing SDI workflow.
• The breakout XLR connection gives the Shogun/a7RII combination both balanced analog XLR audio and 48V phantom power options for condenser microphone solutions.

“This is a classic case of better pixels with preserved quality rather than more pixels compressed heavily.” said Jeromy Young CEO and co-founder of Atomos. “We are helping sensor companies like Sony lead the HD to 4K transition by ensuring the quality benchmark for 4K is high without sacrificing workflow efficiency and speed – no matter what type of video professional you are or what 4K camera you have, Shogun helps you make better images.”

For all of this added functionality, users do not sacrifice usability since the Atomos Shogun and the Sony a7RII have synchronized start/stop trigger and timecode over HDMI meaning one touch recording from the Sony will trigger the record and timecode to start on the Shogun.

Those concerned with the camera’s battery life recording 4K video will be pleased to hear that the a7RII shares the same battery style as the rest of the a7 line-up meaning it will be compatible with Atomos Power Station Photo and Video models when they released in quantity to the market in the coming month. By connecting a Power Station, users will be armed with a continuous power system and 3x fast charger for the a7RII and other devices on the rig.

In short, the sensor of the Sony a7RII promises plenty, but the only way to get long shoots in the quality 4K demands is with an Atomos Shogun and Power Station.

Atomos is based in Australia with offices in the USA, Japan, China and Germany and has a worldwide distribution partner network. Further product information can be found atwww.atomos.com with the Atomos community active on Facebook (/atomosglobal), Twitter (@Atomos_News), Vimeo (/atomosvideo), YouTube (/AtomosVideo) and Videogram (atomos.videogram.com).