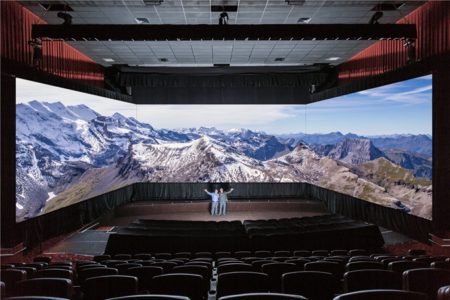 The Escape content running on the Samsung Gear VR simulates what moviegoers will experience when they go to the cinema to see a feature in Barco Escape format.  It allows the user to look around during certain scenes of the movie and see what it feels like to view not just what’s on the main screen, but peripheral visual content on the side screens that further immerse the user into the movie.

“The Samsung Gear VR is a powerful tool to introduce Barco Escape to the world,” explains Ted Schilowitz, CinemaVangelist for Barco and 20th Century Fox’s resident Futurist.  “Barco Escape is all about the future of the cinema experience, so what better way to show what we are working on as we roll out this immersive movie going experience for worldwide audiences than to introduce it along with Oculus and Samsung on their latest Samsung Gear VR headset. We are thrilled Oculus and Samsung asked us to be a key part of the launch content on the Samsung Gear VR.”

Barco worked with 20th Century Fox and director Wes Ball to re-envision his short movie “Ruin, ” which is currently in development with the studio to become a feature film, into Escape format as one of the featured content pieces for the Samsung Gear VR release.  While Barco Escape is still in its early stages of deployment, the technology company saw the strong connection points between the “all around you” visual wonderland it is creating in theaters and the Virtual Reality experience Oculus offers.

Ball’s upcoming movie with 20th Century Fox, “The Maze Runner”, will be the first feature film released in Barco Escape format in select theaters on September 19th. In addition to the wide domestic and international release of “The Maze Runner” in large format and traditional theaters, fans can watch the special Escape version in the following locations: Los Angeles, California; Davie, Florida; Plano, Texas; Woodridge, Illinois; and Redwood City, California; and Belgium.  “The Maze Runner” will be released in Auro 11.1 immersive sound by Barco, the latest in this year’s series of top productions to offer 3D immersive sound to its audiences.

“We are breaking new ground by combining the latest Barco Digital Cinema projection technology and advanced visual storytelling.  Every day, we learn something new as we experiment with this new format,” says Schilowitz.  “It’s a tremendous amount of fun to collaborate with such forward thinking teams to make this first movie in the Escape format possible.”

For those fans outside of the cities currently equipped with Barco Escape theaters, the Samsung Gear VR allows them to get a glimpse of this new movie going experience through Virtual Reality.

About Barco
Barco, a global technology company, designs and develops networked visualization products for a variety of selected professional markets. Barco has its own facilities for Sales & Marketing, Customer Support, R&D and Manufacturing in Europe, North America and APAC. Barco (NYSE Euronext Brussels: BAR) is active in more than 90 countries with 4,000 employees worldwide. Barco posted sales of 1.158 billion euros in 2013.

About THE MAZE RUNNER
When Thomas wakes up trapped in a massive maze with a group of other boys, he has no memory of the outside world other than strange dreams about a mysterious organization known as W.C.K.D.  Only by piecing together fragments of his past with clues he discovers in the maze can Thomas hope to uncover his true purpose and a way to escape.  Based upon the best-selling novel by James Dashner, the film stars Dylan O’Brien, Kaya Scodelario, Aml Ameen, Thomas Brodie-Sangster, Will Poulter.