I recently reviewed the Cinemartin Loyal LT and found it to be a fantastic professional tool. Now Cinemartin has dropped a bomb on the competition with an introductory offer of 99 Euro for these monitors!

Here is the official release.

Available at 7″, Cinemartin is proud to introduce the new range subfamily, LT and LT S4K versions of the 2016 Loyal series of Bright monitors. Bomb the market with full of features like native FullHD with HDMI input and output with loop, IPS high quality panel, an astonishing contrast ratio of 1200:1, a brightness of up to 600 NITS, and featuring an extensive array of tools such as Exposure, False Color, Histogram, Peaking, the ability to change aspect ratio, markers, etc., and supporting anamorphing lenses, just at an introductory price of 99€.

Available in 2 versions, LT and LT S4K the latest one supporting video at up to 2160p.
With a contrast ratio of up to 1200:1, up to 600 NIT’s of luminance the new LT series are the great choice for any HDMI device.

It have a built in zoom up to 16x that, as with almost any feature, can be assigned to any of the custom buttons located on top.

A part of the high resolution and luminance, LT series comes with a full arsenal of Assist tools, inherit from its big brother monitor the Loyal STD. series, it comes with the following video tools: 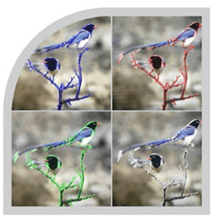 The peaking filter, commonly refered as Peak feature.
There are four filter color alternatives; red, green, blue and white, with peaking ranges from 0 to 100.

The exposure filter, known as Zebra, comes to assist in exposure adjustments in the typical mode of the Zebra pattern. Exposure level ranges from 0 to 100.

This tool has many purposes.

The False color is used to help on setting of camera exposure, which enables to achieve properly exposure without external test equipment.

Available as of now as a standalone display or as a shoot kit pack that comes with a battery plate (for Sony NP-F Batteries), an AC adaptor, an HDMI cable, sunhood and a hot shoe mount.

Price of both models is 99$ standalone monitor and 149$ the monitor with the shooters kit (sun hood, battery plate, and dslr arm) , delivery starting at February 12, 20107 is about 3-4 weeks with a express option available for inmediately delivery (5 days).