Boasting the most extensive library of VR apps and games on the web, Fibrum will showcase its VR prowess at CES 2016.

Fibrum, an international Virtual Reality company with over 4.3M downloads of its VR apps and games, is presenting its global platform for Virtual Reality where users and developers from all over the world can experience the highest quality of VR content. The Company will showcase its innovative platform, that currently has the largest number of VR apps available – with 22 apps in the AppStore, on GooglePlay and in Windows – and that allows:

– Users to turn their phones into VR devices through Fibrum’s extensive library of mobile VR games and applications that are available for the most popular mobile platforms, and worldwide through the dedicated Fibrum store, giving access and fun to virtually anyone;
– Gamers who play PC games can turn any game in an immersive VR experience using Fibrum’s unique streaming capabilities;
– Global developers the ability to download Fibrum’s free SDK  to create VR games and applications on their own.

Your Headset or theirs, read on… 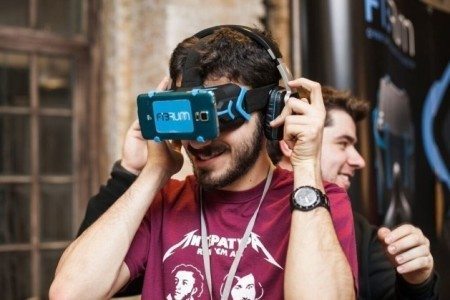 Fibrum’s proprietary headset provides exceptional VR content in HD quality and a larger angle of view than its competitors – 110 degrees versus the typical 70 degrees – for superior game play and a truly immersive VR experience. Fibrum’s headsets also have special lenses that allow users with poor eyesight to have a clear picture in virtual reality (from -5 to +5 variance).  Users can also play Fibrum’s extensive game VR game library with their own headsets as Fibrum’s VR content is compatible with any other VR headsets.

Fibrum is strongly committed to its international developers by providing a free SDK that allows for the connection of gamepads, joysticks and other devices to users smartphones to allow for smooth movements within games (shoot, walk, run). Fibrum’s SDK was designed to fix some common issues with VR game development such as “drift” in VR mode and allows developers to integrate a VR mode into a new or existing Unity3D project in  minutes.

In addition, the Company provides additional benefits to end users by offering a special premium club card that allows users to download Fibrum apps for free and also receive a 50% discount on partners’ VR apps. CEO and Founder Ilya Flaks said, “Based on the belief that Virtual Reality should be available for everyone, Fibrum’s unique products turn ordinary devices into extraordinary worlds and our low cost gear makes Virtual Reality a reality for everyone. Fibrum is striving to create a global community of Virtual Reality enthusiasts.”