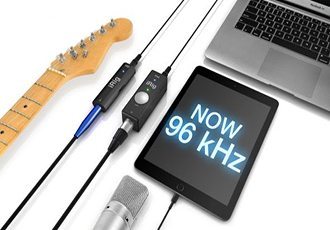 The higher the bandwidth, the better
Simply put, musicians can now play and record with recording studio quality sound. Both iRig HD and iRig PRO are now able to capture even more of the subtle nuance and detail of analogue instruments and other input sources. It’s an ideal feature for professionals and advanced home studio enthusiasts who won’t settle for anything less than the best sound possible – and it’s a completely no-cost update for all existing iRig HD and iRig PRO users.

iRig PRO – The 96kHz all-in-one mobile audio solution
iRig PRO is the first full-featured compact audio and MIDI interface for iPhone, iPad, iPod touch and Mac or PC. It’s like a Swiss Army knife for mobile recording: It sports an XLR/¼” combo input socket and a MIDI input which means that it can be used with any XLR microphone (it even provides 48V phantom power supplied by an onboard 9V battery), guitars, basses, keyboards, line-level instruments and MIDI controllers.

It’s perfect for the musician on the move who needs to have it all. Now anyone can record guitars, bass, vocals, harmonies, acoustic instruments, keyboards, MIDI data and more without having to swap interfaces, and lose that creative flow. iRig PRO is compact – about as small as a harmonica – and comes with everything needed to get started playing and recording right out of the box. Its included Lightning, 30-pin and USB connector cables ensure the right connection every time.

iRig HD – Streamlined high-definition sound
High-definition sound that fits in the palm of a hand – that’s what iRig HD was made for. It’s a slim and compact audio interface with a ¼” instrument input that features an input gain control knob, a multicolour LED and ultra-low-draw power consumption circuitry. Its ¼” Hi-Z input jack can accommodate any guitar, bass or line-level instrument, and its detachable Lightning, 30-pin and USB connector cables allow for maximum compatibility. And with the addition of 24-bit/96kHz recording, now it sounds better than ever before.

A world of apps
Both iRig PRO and iRig HD come equipped with a USB cable that allows them to be used with a computer and a wide variety of popular 24-bit/96kHz recording-compatible DAW software, like Apple Logic Pro X, Ableton Live, Avid Pro Tools, MOTU Digital Performer, PreSonus Studio One and Steinberg Cubase. In addition, both come with a full suite of mobile apps and software designed for creating inspired music on the go.

Pricing and availability
The 96kHz firmware update is provided to registered owners of iRig HD and iRig PRO at no charge. To update, users just need to simply log into their user account on the IK Multimedia web site, download the firmware updater for their computer OS and then follow the simple installation instructions. The PC version of the Firmware Updater is available now, July 1, 2015, and a Macintosh version will be available in the second week of July, 2015.

Alongside this special announcement, IK Multimedia is offering a $/€20 discount on the list price of iRig PRO and iRig HD through the entire month of July. iRig PRO is now available for $/€129.99 and iRig HD is available for $/€79.99. Both can be purchased from music and electronics retailers worldwide and from the IK online store.