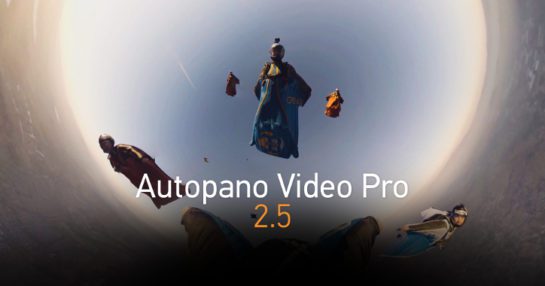 Congrats to the staff at Kolor. They have, by far, created the state of the art 360 VR stitching software package. The combo of Autopano Video Pro and Autopano Giga is an unbeatable combo for creating professional 360 VR content.

This latest version has been in the works and the wait has been worth it. With the debut of the Omni Importer as a vital part of Autopano Video and tested thoroughly with the GoPro Omni, the 2.5 version brings a host of new and improved features.

Undo / Redo / History framework
Yes, this standard part of any good software wasn’t available before, but now it’s here!
Apple ProRes support
By popular demand, we added official support to Apple ProRes in input and output of AVP.
Alpha Channel support
Alpha channel is now rendered properly for CineForm and ProRes. This allows to export individually each camera with the color correction, enabling more post production possible.
New Stereo Rendering Options (AVP only)
In some very specific setups, you needed to modify
MP4 file merger
Our customers told us that they were interested in having the merge tool on it’s own. It is now available as a single action in the AVP menu.
Clever interface to retrieve missing videos
Added an interface to relink videos that are missing when opening a kava file.
Improved batch renderer
Re-organize your batches, drag’n’drop you kava files that are ready to render directly in the batch render of AVP to add batches.
Rolling shutter effect reduction for Omni videos
Autopano Video detects shots captured by GoPro Omni rigs and applies corrections for rolling shutter, allowing the reduction of the related artifacts.
Small UI updates
Moved some menus, added shortcuts, and tool tips with shortcuts in them.

Along with that, we have the new Adobe Premiere Pro Plugins.

GoPro VR Horizon
With this plugin you can straighten the horizon of a 360 video using sliders for the yaw, pitch and roll axes. You can also use keyframes to create transitions between the spherical point of views and an optional “Smooth transition” checkbox helps you smoothen complex transitions.
GoPro VR Reframe
With this second plugin you can input a 360 video and create an authored standard video by changing the field of view and the point of view, using the same three sliders for yaw pitch and roll.
And just like GoPro VR Horizon, you can use keyframes and the “Smooth transition” checkbox for your storytelling.