Mettle has just announced Skybox Studio V2, and it is an amazing package of goodies for 360 content creators. Life just got a lot easier for all of us with this new toolset.

Chris Bobotis and his team took a close look at how we were working and what we needed to do. The conclusion was that much of what we were doing would be much easier if done inside Adobe After Effects with a comprehensive toolset. Don’t let the idea of working in After Effects scare you, the three new modules that were created make it easy.

Skybox Composer creates an easy workflow for removing the Monopod or tripod that your 360 camera is sitting on.

Also, you know have Skybox Project 2D and Skybox Rotate Sphere available in After Effects. In the past, these two tools were only in Adobe Premiere CC.

Now, let’s take a look at how all this works.

First, let’s import the shot that we need to work with. 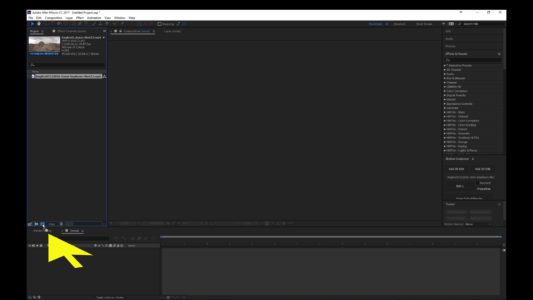 Then let’s drag it down to create a New Composition. 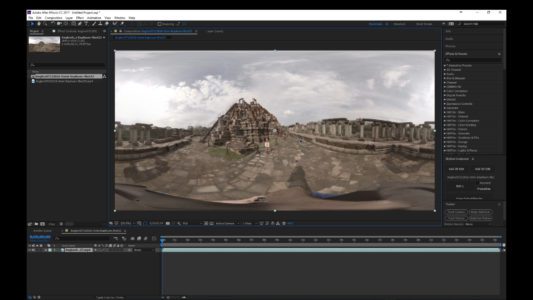 The shot that we are using was from my Angkor Cambodia 360 shoot. At the famous Bauphon Temple. 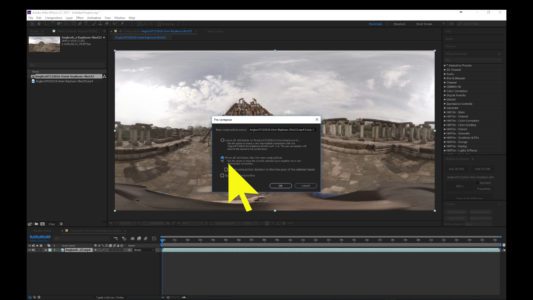 Right click on the video file and select Pre-Compose. Next select the second choice to “Move all attributes into the new composition .” 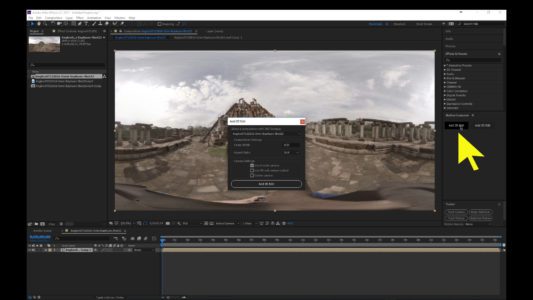 This is where the new Skybox Composer comes into play. 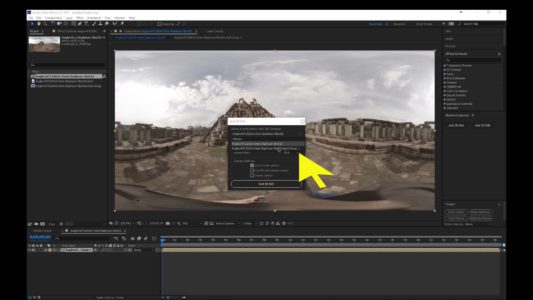 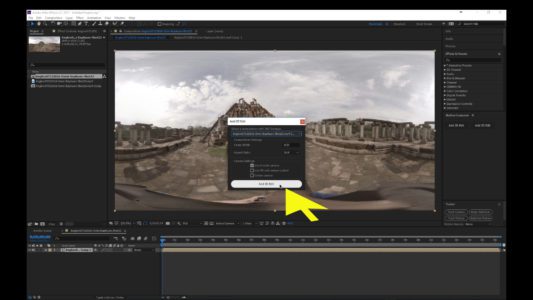 From the drop-down select Comp 1. Then make sure that your Comp Width is the right size,  the aspect ratio will stay at 16:9. We will be using a 2-node camera. 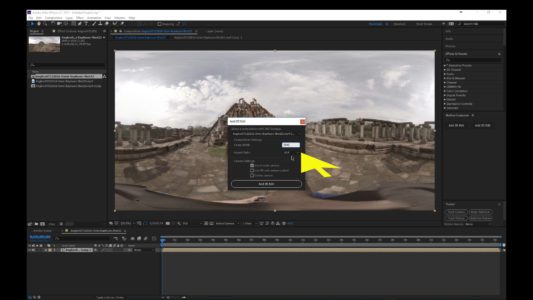 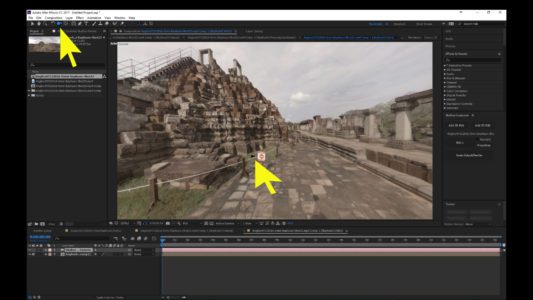 Select the “camera” icon, and you will be able to view the image in 360 space. 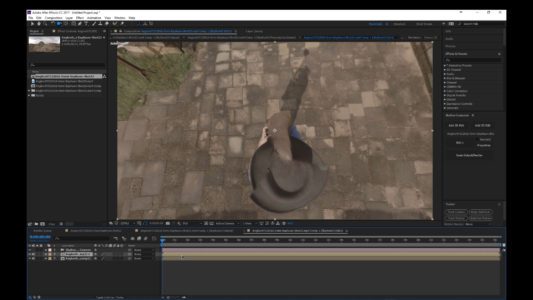 Adjust the image to where you were looking straight down at the person holding the camera. That’s me by the way.

I want to remove myself in the shot. Notice that the stitch on my hat is not very accurate. I knew I would be removing myself, so I didn’t worry about it. Adjust the picture so that you have some room on at least one side of the image to be removed. 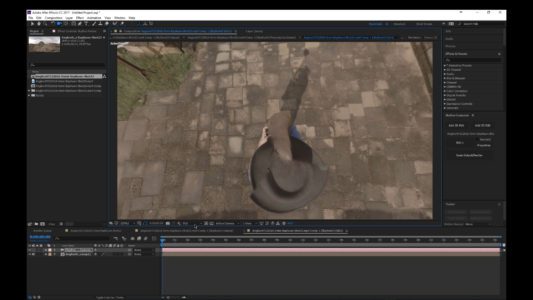 Now we want to duplicate that video file. To do this click on the video file and then click “Control” and “D” at the same time. Select the uppermost version of the video file; that’s where will be doing all of our work. Select the pen tool and create an shape roughly the same size and shape as the one you want to replace. 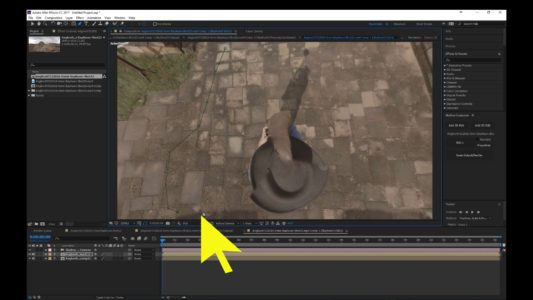 Select the arrow icon, and then click on the shape mask. Click and hold on the sheet mask and slide it over the top of the image that you want to replace. Move it into place and use the pen tool to adjust the nodes of the shape mask to completely cover the object to be replaced. 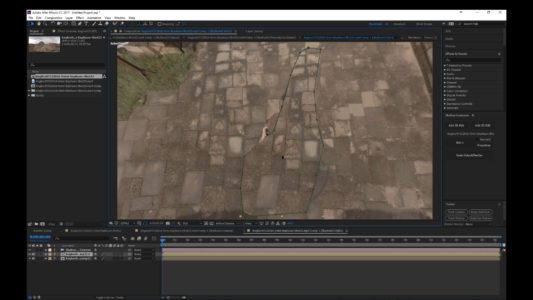 When you’re done doing that expand the video file so that you can increase both the “Mask Feather” and the “Mask Expansion.” This will give you a nice smooth transition between the two images. 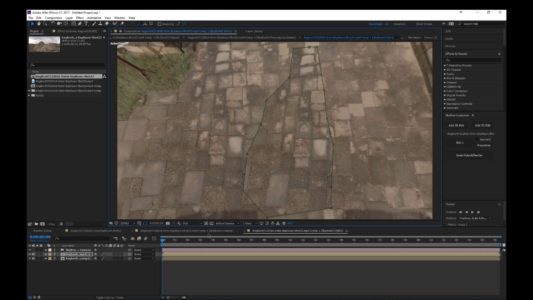 Take note that we have been working in a composition called SkyBoxV2 Edit. If we click on SkyBoxV2 Output, you will see that it is in Equirectangular format and the object, me holding the camera, has been removed. 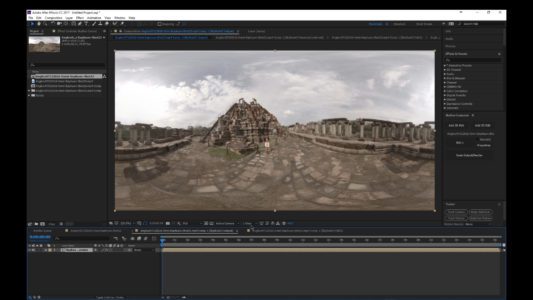 If you need to you can go back into your adjustment calm and increase the Feather and Mask Expansion to smooth things out more. 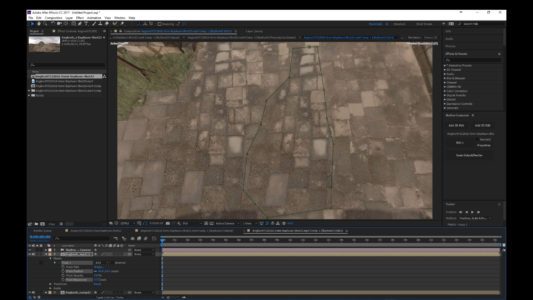 When that is adjusted to your liking, the last step in the process is to export the video file to Adobe Media Encoder Queue. Doing it this way will ensure that your video file has the 360 metadata embedded in it. 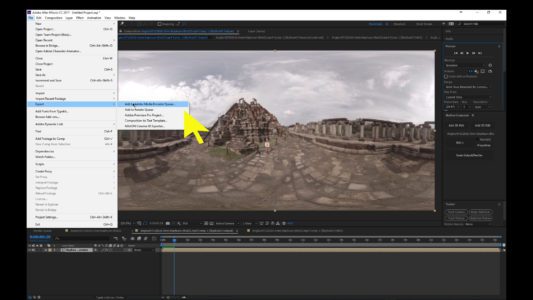 It’s really just that simple. Mettle has created a smooth easy to workflow.