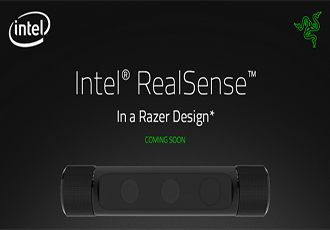 Razer and Intel are collaborating on a 3D-sensing camera for consumer-end VR and gaming computers. The camera reportedly makes use of Intel’s RealSense technology, which so far has focused primarily on advanced facial recognition features as well as gesture input. Why would you want that? Well — Intel says it will let anyone put their face into a Twitch game streaming video.

Intel says that Razer’s new camera will let anyone do the same thing without setting up a pricey camera rig, because the depth sensing camera and software can isolate your face from the background and add it to the video.

The camera’s design has yet to be finalized and Razer has confirmed that the images released so far are entirely conceptual, but Intel is apparently partial to the design used in the prototype.

We’ll keep an eye out for the RealSense-powered Razer webcam, including its price tag and name, as we get closer to 2016.
Read more: http://www.digitaltrends.com