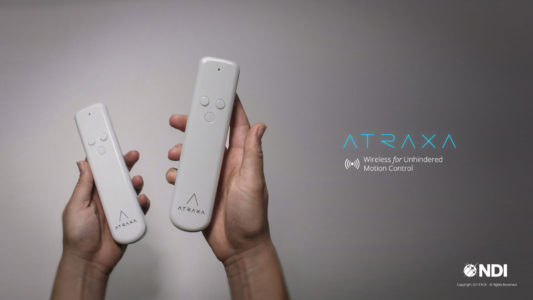 Northern Digital is a Waterloo, Canada-based manufacturer of 3D measurement devices, and while the company has mainly focused on creating for various industries such as medicine and aeronautics throughout their 35 years of existence,

they’ve recently unveiled a reference design for a magnetic tracking system for VR headsets and controllers.

The reference design, dubbed Atraxa, is available either as an enclosed controller, or as three bare PCB components: two trackers, and a single receiver.

Since the reference design is intended for OEMs, you won’t be able to buy this as a consumer, at least not until a third-party company integrates and sells it.

As an enclosed unit, NDI’s prototype housing isn’t anything to write home about in terms of ergonomics, as they look more than a bit like Wiimotes. For the sake of a demo of the company’s underlying tech though,

it was more than enough to show what the system was capable of. And unlike Wiimotes, Atraxa tracks the user’s hand movements in 6DOF, and to surprisingly good effect.

The tracker module integrates both an IMU and a transmitter coil that generates an EM signal, sort of like how Sixense’s STEM controller works.

A single receiver module, which should ideally be integrated into a headset, houses a sensor board that measures the transmitters’ magnetic fields and manages the wireless communication between tracker modules.

That last bit is only available as a bare PCB so companies can mount it however is most convenient,

although NDI was showing off their own implementation housed in a white plastic box strapped to the top of a Samsung Odyssey headset running through SteamVR, controllers and all.

The system knows where the receiver is located via a headset’s own tracking system, giving the receiver a static reference frame to understand the position of the controllers relative to the head.

If the headset doesn’t have its own tracking, a static base station can be used to track both head and hands.