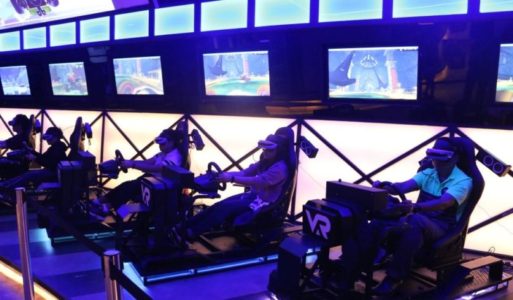 Location-based VR made serious headway in Malaysia this month as immersive entertainment specialists VAR Live launched what is now the largest VR-based theme park in the entire country.

some of which featuring various haptic feedback technology; from shaking floors and custom peripherals to enormous fans and other 4D elements.

The current layout features HTC Vive and Window Mixed Reality headsets tethered to ceiling-mounted PC’s; although VAR Live has already indicated plans to upgrade to 5GHz WiFi in the near future,

along with support for multiplayer experiences and VR backpacks. This would no doubt take advantage of VAR Live’s infrared positioning technique, allowing friends to move freely throughout various co-op experiences.

Some of these titles include Zombie Jail, a bone-chilling multiplayer horror experience featuring haptic gun peripherals and a shaking floor;

City Hero, an action-packed cooperative shooter where players are tasked with saving the city from a robot turning its citizens into flesh-hungry zombies;

VAR Live will reportedly keep its catalogue of immersive experiences on the regular cycle, offering 3 to 4 new experiences with new hardware options every year.

Along with support for potential VR-based esports, the company is also looking to open its services to local companies and government sectors for training purposes.

“If the police need to train what to do if five people attack one person at the same time, it can be done in the interactive computer-generated experience taking place within a simulated environment,” said VAR LIVE Global Limited chief executive officer Steve Ngu.