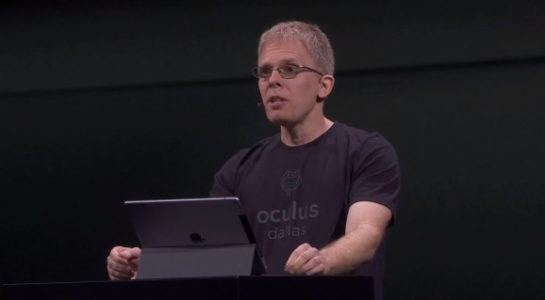 During a freewheeling day two keynote speech at Oculus Connect 5, Oculus CTO John Carmack spoke about a number of technical and design challenges the company confronted with Oculus Go, as well as new features that will come to the standalone headset platform and plans for the upcoming Oculus Quest.

The first half-hour of Carmack’s keynote was largely spent discussing his dissatisfaction with various aspects of Go — and his process of learning to live with some of them — including inconsistent UI elements across various apps that were made by different teams, developed over the past four years.

Yet he noticed that continued use of Go by owners appeared to be higher than the earlier Gear VR, which depended on a smartphone for its visuals, a situation he was still working to understand. Small tweaks to the frame rate, comfort, and features such as foveated rendering might have made a difference.

He also mentioned that the 64GB Go model has been more popular than the entry-level 32GB version, despite a higher price. While he didn’t divulge specific sales numbers, he said that the Go outperformed even his own optimistic projections.

Carmack said that the company has been working on several additional features for the current version of Go: some support for microSD cards over USB, perhaps enabling up to 64GB of external storage using the FAT32 file format, as well as a low-power mode that could extend the battery a little, and a night mode — presumably with brightness and interface changes. Thanks to work with Qualcomm, he said, Oculus recently added support for playback of certain 5K videos in H.264, with some higher-resolution video support in H.265 as well.

As the keynote continued, Carmack looked to the future of the Go platform, which Oculus said yesterday represents one of the three platforms it will be actively supporting going forward: low-end standalone VR, premium standalone VR, and cutting-edge tethered VR. The company apparently expects that software developed for today’s Go will be compatible with the next Go, with Quest and Rift having separate but similarly maintained software libraries.