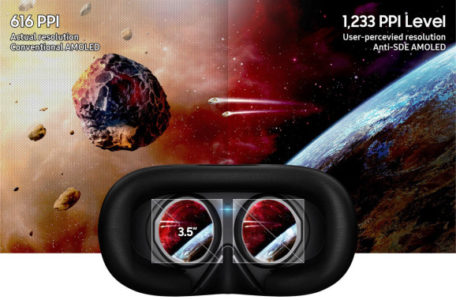 Leaked two months ago by the FCC, Samsung’s HMD Odyssey+ Windows Mixed Reality headset became official today with a somewhat unexpected feature: a “user-perceived resolution” of 1,233 pixels per inch, double the apparent detail of the original Odyssey. Of course, there’s a catch.

While the new headset preserves the original Odyssey’s $500 price tag and basic design, it ups the ante with one key feature: an “anti-Screen Door Effect technology that effectively delivers over twice the pixel count of the display resolution.” Samsung explains that it has solved the screen door effect — a black grid visible between pixels — by applying a light diffuser to the grid. The diffuser uses ambient light from adjacent pixels to make the black lines “near impossible to see.” Consequently, Samsung claims that Odyssey+ doubles the perceived pixel density of its twin 3.5-inch 616PPI AMOLED displays, though they each remain at the same 1440 x 1600 resolutions found in the first Odyssey.

While the change might seem somewhat dubious, it’s actually a practical way to improve VR visual quality. Merely upping the pixel count and making the grid smaller places a heavier rendering burden on the PCs that power VR headsets, further taxing machines that already struggle to power twin high-resolution displays at once. By instead cleaning up existing pixels, Samsung can deliver better perceived visual quality for users without choking a PC’s GPU.

Apart from the display improvements, other Odyssey+ features are similar to the Odyssey’s, including integrated AKG headphones, microphones for Cortana voice controls, and twin 6DOF controllers. It still uses single fresnel lenses with a 110-degree field of view and supports a 60-72mm range of eye distances. But Samsung has made a few quality-of-life improvements to increase user comfort.

Odyssey+ is slightly lighter than its predecessor, dropping from 1.42 pounds to 1.31 pounds, minus cable weight. It also features an 8mm wider nose guard (now 40mm) and 8mm wider eye box (now 146mm), promising that a “breathable anti-fog material” in the face padding will produce less fogging than the original model. The Odyssey+ will be available for purchase starting later today through Samsung’s online store and the Microsoft Store. Availability in South Korea, China, Hong Kong, and Brazil is expected “soon.”