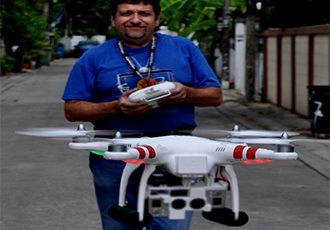 “Anyone who thinks that it’s cool to fly an unmanned aircraft near a large commercial airliner on approach to an airport needs to understand that…we will find them,” FAA Administrator Michael Huerta said in an interview.

U.S. regulators said that pilots are noticing drones in flight at a far higher rate than last year, triggering authorities to step up efforts to prevent a midair collision as drones proliferate in U.S. skies.

The Federal Aviation Administration is investigating or has already fined operators in more than 20 cases of drones flying too close to aircraft. The Justice Department is assisting on some of those investigations. Federal criminal penalties for endangering an aircraft range up to a $25,000 fine and jail time.

“If, God forbid, someone takes down a commercial aircraft [with a drone], rest assured I will prosecute that case very vigorously,” Queens District Attorney Richard Brown said.

The increase in sightings tracks the growing popularity of consumer drones, which are becoming cheaper, more advanced and easier to fly.

Some consumer drones already include software that prevents them from flying near airports or above certain altitudes, and some federal lawmakers are pushing legislation to require such software on all consumer drones.

Know before you fly folks!

Read the rest of this story at WSJ.com.