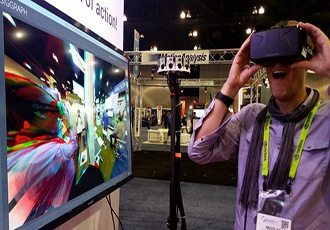 Last week at SIGGRAPH conference in Los Angeles, California, VideoStitch has been showcasing its real time video stitching using the Oculus Rift PC-based head-mounted display (HMD). Several GoPro cameras where on the demo floor to capture footage which was then instantly converted into 3D 360 degree video and viewed within the device.

360 degree video is set to become a hugely important part of the virtual reality (VR) industry as the technology heads towards the consumer market in the coming months. Using multiple cameras, filmmakers are creating experiences both story-based and otherwise that put viewers in the centre of the action. But, while work in this field is progressing by the day, plenty of work still needs to be done to streamline the process. Thanks to this newest leap from Videostitch; real-time 3D video stitching.

“Today the standard in 360 live streaming is still 2D, but for real life events to be realistically streamed into Virtual Reality we’ll need to make the leap towards real time live streaming in 3D”, said VideoStitch founder and CEO, Nicolas Burtey. The company is yet to talk about how it might distribute its work for others to use or confirm compatibility with other HMDs.