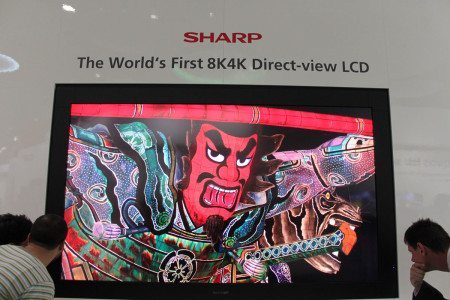 Sharp announced that the world’s first 8K Tv will arrive next month at the bargain price of only $133,000.

For those of you complaining that there isn’t enough 4k TV content, this will really give you something to shout about. 8K TV is the same as taking four 4K tv images and stitching them together on one screen. that’s a resolution of 7680×4320 pixels. That’s 104 pixels per inch, if you do the math. The 85 inch screen doesn’t even have a tuner built in. Why? Because they don’t have one that can recieve whatever signal 8K is going to be. They just haven’t decided yet.

Having already viewed 8K two years ago at NAB, I knew that this day would be coming.

The LV-85001 will also upscale your 4k or HD content to fit the screen. But for the real deal, I have no doubt Sharp will have some demo material for buyers, or at least I certainly hope so at that price. There will be broadcast tests for 8K some time next year and if you buy one of these babies, I don’t thionk it will be hard to get on the very short list.