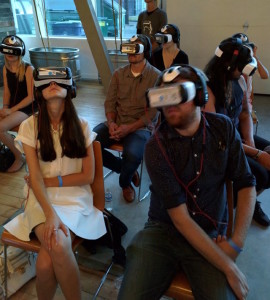 Sam Machovech at ARS Technica wasn’t very impressed with the Sundance Film Festivals early adopter efforts. Here is part of his story. Please click the link below to read the rest. What do you think?

Did you hear? Virtual reality is legitimate now, because filmmakers have found it.

Forget those childish toys that you call video games, and think beyond those little 360-degree videos captured at concerts. VR is now a place for capital-F Films, complete with New York Timescelebrations and dedicated exhibits at Sundance. Recent VR films have some impressive sounding premises, too: immersion in the wilderness alongside bison and cheetahs; trippy, sense-filling music videos; stark, racially charged drives through poor neighborhoods; and much more.

VR filmmakers have taken some pretty diverse approaches, but most of them have one unfortunate thing in common: an overreaction to the form. In their rush to put viewers inside their concepts, these burgeoning creators forgot about the importance of directing and cinematography—a fact that I, a devout believer in VR’s future, can no longer stomach.

It’s not just a Cardboard problem

In its January push for VR content, the Sundance Film Festival made a pretty bold move. It sponsored and distributed most of the fest’s VR films for free to anybody with compatible equipment. That audience wasn’t just Oculus early adopters or GearVR purchasers, either, as anybody with a Google Cardboard kit and a working smartphone could join in.

Cardboard works by splitting your phone’s display in half as lined up to a curved lens rig, which, when pressed against your face, is supposed to present a stereoscopic image that moves around as your head moves. Look up, look down, look around, and the image on your screen should move around accordingly with no lag—meaning, you should wind up with a working, poor-man’s VR rig. These little sets are cheap to make, and millions have been given away by Google (including a one-million-strong giveaway as a partnership with the New York Times), so Sundance has quite an audience with the bare minimum stuff needed to check these films out. No laminate badges, flights to Utah, nor paid apps required.

Click here to read the rest of this story