There are drones galore at CES 2016. There is even a drone rodeo, but this drone has to take the cake. The Ehang’s 184 AAV  Was designed as a one cedar electric drone, says Ehang CEO Huazhi Hu. The Chinese built 184 is simple and easy to use the end, terminal on and select your destination using a 12 inch touchscreen tablet, then just press the “takeoff” button. The only thing missing is the gimbal so you can take video while flying.

The automated flight system will take over and control everything from communication with air traffic control and other aircraft, avoiding other obstacles, and , of course, navigating to get you to the destination of your choice. 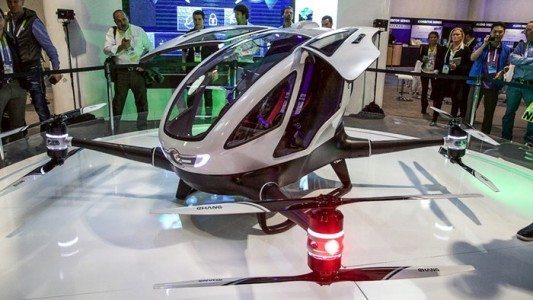 Built-in failsafes are designed to take over in the event of malfunctions, plus you can even put the brakes on and have the Drone hover in place. The one person drone is built from carbon fiber/epoxy composite body with an aluminum alloy frame. The Asian voters put out a combined force of 142 horsepower. And the four arms fold up when the drone is on in the ground allowing it to take up less space.

It takes 4 hours to charge the 14.4 kWh battery pack in trickle mode or 2 hours when you use the fast charge. Reportedly you can stay airborne for up to 23 minutes at sea level. Weighing in at a svelt 440 pounds, the AAV can accommodate a passenger weighing up to 264 pounds. The maximum speed is 62 miles per hour than the maximum altitude is 11,480 feet.

In case you have luggage,  it does have a trunk. 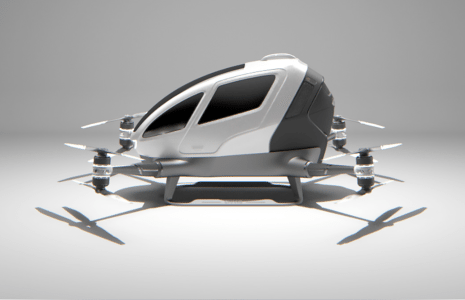 To complete the package is as full interior and exterior lighting, air conditioning, all four G Internet connection, and gull wing doors.

Ehang says that the 184 is fully functional and a worldwide series of demonstration flights are scheduled to begin shortly. But hold on to your seats the price tag is going to come in at between 200,000 U.S. dollars and 300,000 U.S. dollars.