With Star Wars: The Force Awakens upon us, droid fans everywhere will want their very own droid. Well, now you can have it and do it yourself. That is, if you have a 3D printer. 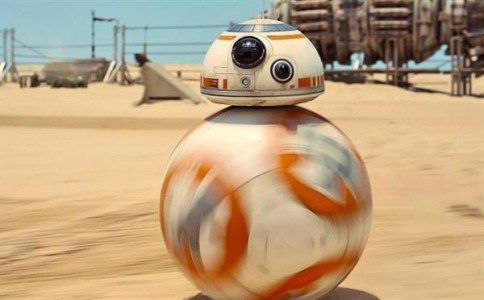 This is it, everybody. We’ve entered the final countdown to Star Wars: The Force Awakens—easily the most hyped and anticipated movie event of the year, if not the past decade or three—being released in theaters. There has been an absolute torrent of news, rumors, sneak peaks, and alleged spoilers flooding the internet ever since the Disney/LucasFilm space opera production was first announced last year, however perhaps more than all of that, there has been merchandising on top of merchandising: collectible figures, board games, lightsabers, Lego kits, Millenium Flacon quad-copters, Hasbro TIE fighters, and enough Storm Trooper helmets to outfit an army (actually, that was kind of the case in China).

What has inspired and delighted us the most about this phenomenon, is the number of fan-created and especially 3D printed Star Wars memorabilia, toys, costumes and robots to have emerged on the independent maker scene—many of which go beyond being mere prop displays, by creatively and skillfullly incorporating functional electronics and robotics. We’ve seen a TIE fighter toy hacked into a 3D printed flying drone, a 3D printed flying Speed Racer, and a 3D printed Dejarik holochess table, just to name a few. However, if there is one character/toy/robot that has stolen the show, both in terms of commercial merchandise and super-fan 3D printing projects, it’s the adorable, spherical, and mysterious BB-8 droid.

BB-8 as shown in the official Star Wars trailer

While Sphero—a robotics startup company that had previously and unwittingly designed a similarly spherical robot, and got a huge break once Disney found out—sells an app-controlled miniature BB-8 toy for roughly $150, many makers have taken it upon themselves to design and build functional BB-8s at home, ranging from 3D printed BB-8 tree ornaments to 3Doodler BB-8 heads to life-size 3D printed droids. Falling more closely into that last category, we have today come across two new, movie-realistic 3D printable designs that “awaken the force of 3D printing”, as one team put it, and bring the BB-8 to life.

The first comes from the BB-8 Builders Club, an international organization that is entirely devoted to building high-quality, full-scale replica models of the BB-8 through rapid prototyping and 3D printing. The club publicly released the STL files for their BB-8 Droid under a creative commons license so that makers anywhere could 3D print it with confidence. On October 8th 2015, a day now proudly referred to as “October BB-8th”, LucasFilm Ltd. officially recognized the BB-8 Builders Club, and since then their work has been featured on StarWars.com, Tested, and even the Discovery Channel.

Most recently, the far-reaching, international 1,800+ member club decided to improve their speed and efficiency by using 3D printing software Simplify3D across the board. They’ve also taken it upon themselves to help the students at a Texas high school 3D print their own BB-8 by donating 3D printing filament and Simplify3D software to the senior robotics class. You can check out the free to download BB-8 Builders Club 3D printing files on their official Facebook Page.

The second impressive 3D printed BB-8 droid design was brought to our attention by Jean-René Bédard, an experienced software engineer and part-time maker whom you might remember from this pair of 3D printed ‘MT-20’ robots we featured a few weeks ago. His take on the BB-8 Droid is what you might call feature-loaded: fully 3D-printed, remote-controlled, powered by an Arduino-based robotic platform, able to self-balance on two wheels, play native sounds, and it contains multiple programmable LEDs.

According to Bédard, he began by designing his Star Wars supertoy in Sketchup before sending it to print on his Dremel Idea Builder 3D printer—a process that took a total of 50 hours using two printers, and that used 200 meters of PLA filament. The robotic platform he used is a Sainsmart Instabot V3, the programmable LEDs are Adafruit Neopixels, and the head moves via a micro servo actuated via the Arduino. In terms of finishing, Bédard revealed to us two clever post-processing ‘hacks’ that we’d never have guessed just by looking: the paint job was actually accomplished with an assortment of orange and metallic nail polishes, and as for that big black ‘eye’? It’s actually half of a Christmas ball ornament. The cost-saving ingenuity is strong with this one.

Although Bédard’s RC BB-8 isn’t capable of smoothly ‘rolling’ on its sphere as the droid does in the movies, instead relying on two wheels, he has said that he is currently working on a second version that will roll around and keep its head on through a system of self-orienting magnets. The 3D printable STL files and assembly instructions will be made available in the near future.

These are just two examples of great 3D printing projects inspired by Star Wars: The Force Awakens and the (so far) universally-loved BB-8 Droid…though much like all these Star Wars movies and spin-offs, we have a feeling they won’t be the last.