For some of us this is even better than Judgement Day being averted. A modern Sci-Fi Classic, Terminator 2 is coming back to us in glorious 3D. I just can’t believe that we had to wait so long. Perhaps it’s for the best. The art of 3D conversion has been growing in leaps and bounds to new dimensions. So this 3DT2 should be everything we could have hoped for.

James Cameron himself is behind the endeavor and is aiming towards a theatrical release in 2016. According to the report, Studiocanal and DMG Entertainment are behind the effort, and are planning to release the new version worldwide, with China seen as the biggest potential market. Accordingly, if you would like to learn more about DMG Entertainment, you can take a look at this fascinating Hollywood Reporter article that includes an interview with the CEO of the company, Dan Mintz.

That being said if you remember, Universal Studios did a special T2 3D. 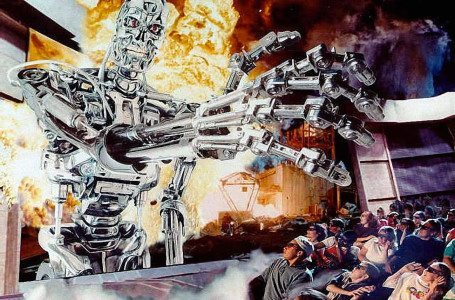 “Next year marks the 25th anniversary of Terminator 2 and that seemed like the perfect time to bring it back but this time in an all-new 3D version,” Cameron said in a statement. “If you’ve never seen it, this’ll be the version you want to see and remember.”

While Cameron has always been an enthusiastic supporter of 3D, the idea that this will becomes the “definitive” version of the film is certainly suspect. Movies from Titanic toJurassic Park have received after-the-fact 3D conversions and releases, and while they’ve certainly offered audiences the chance to see favorite films in a new way – and make everybody involved a little more money – in no case have they replaced the original versions in the minds of audiences. On the other hand, it will allow people to buy tickets for something called T2:3D, which is a win in its own right.