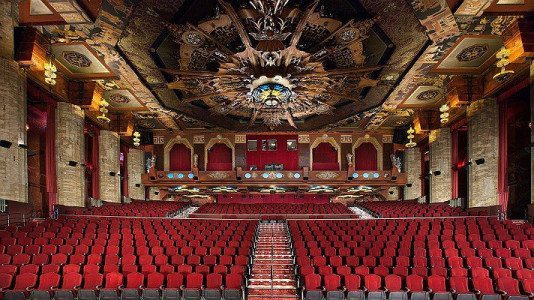 With Star Wars: The Force Awakens in theaters, the question of where to go see it becomes of colossal importance. You want only the best theater to savor the experience.

THE WAIT FOR Star Wars Episode VII: The Force Awakens is nearly over. But with a film this highly anticipated, just heading down to the local multiplex doesn’t seem up to snuff. This movie deserves a palatial theatrical experience with the latest cutting-edge projection technology and highest quality sound system available. J.J. Abrams shot at least one sequence in The Force Awakens using 70mm IMAX cameras—so IMAX is the best format for diehard fans who want the fullest experience.

Tickets for opening weekend have likely sold out, but for anybody who’s waiting out the initial rush—or just wants to see it again—finding the best screen possible is a priority. So in order to facilitate the beauty, we rounded up a list of some of the best theaters across the country for the best possible Force Awakens viewing experience. All but one of these theaters feature either 70mm 2D IMAX projection—which is how Abrams shot the heaviest action in the film—or the 3D IMAX Laser Projection the director praised in anAssociated Press interview. We also took into consideration what we could discern about the atmosphere and plush seating of each theater. (In total there are 7 theaters in North America with 3D IMAX Laser projection and 13 with 70mm 2D IMAX. io9 catalogued them all here.)

TCL Chinese Theatres IMAX, Hollywood, CA
Originally known as Grauman’s Chinese Theater, thishistoric landmark (pictured above) is not only home to The Force Awakens‘ U.S. premiere tonight, but was where the original Star Wars premiered in 1977. It also features one of the largest IMAX theaters in North America, with 932 seats.

AMC Metreon 16 & IMAX, San Francisco, CA
Another of the largest IMAX theaters in the country, SF’s Metreon also boasts a local connection that makes it the place for Bay Area Star Wars fans to see the new film. Since SF is also the home of Dolby Laboratories, the Metreon theater is fortunate enough to have both 3D IMAX Laser projection as well as a theater equipped with AMC ETX, which features Dolby Atmos sound.

For the rest of the story, please click here.